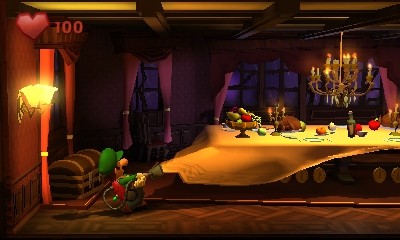 I always wanted a sequel to Luigi’s Mansion, I just can’t remember why.

In December of 2001 when my father bought me a GameCube a few months before my ninth birthday, any game even close to Mario would fulfill all of my Christmas and birthday wishes. If I try to remember what I loved about Luigi’s Mansion, only images of the final, ruthless boss fight and fake doors swinging open and slamming Luigi against the wall come to mind. For many new people, Luigi’s Mansion: Dark Moon will begin their experience with Luigi’s ghost busting trips. For the veterans, Dark Moon will bring forth only glimmers of decade old memories.

The simple puzzles and forgiving difficulty of Luigi’s Mansion: Dark Moon won’t sustain long durations of play, but the cleverly hidden secrets and an abundance of cheerful moments makes the exploration of each mansion a worthwhile experience for all.

One evening while Luigi sits comfortably in his living room chair, he receives a distress call from Professor E. Gadd. Without much of a choice, Gadd relies on Luigi’s expertise to help turn the now violent ghosts of Evershade Valley back to their much more pleasant selves. The sudden mood swing depends on the state of the Dark Moon which the Boos stole and shattered. To reconstruct the Dark Moon, Gadd sends Luigi to five different mansions to recover the pieces of the Dark Moon and restore the ghosts to their normal selves.

GameCube’sLuigi’s Mansion offered a large variety of ghosts with distinctive personalities and appearances. In Dark Moon you will capture the same handful of ghosts that will use items, forcing you to readjust to their new behaviours. Ghosts eventually grow stronger, arrive in larger groups and even carry items to cover their eyes from the flashlight stun. To conceal their eyes, ghosts carry shovels in front of their faces, wear pots on their heads and even hide in cupboards to make theircapture more difficult. Some ghosts will use sun glasses to take a defensive approach while others will use rolling pins and hammers in an attempt to inflict more damage. Underestimating the lethality of different types of ghosts using a variety of objects will see you scrambling to stay alive even in the most basic encounters.

To stun ghosts, a flash from the flashlight will open a small window for Luigi to use the Poltergust 5000 vacuum to trap the ghosts. Above each ghost a number counter dwindles down to zero as you pull the analog stick in the opposite direction of their resistance. As stated before, the items ghosts carry will change the approach to each encounter. Since you learn Luigi’s entire ghost busting abilities in the first hour of the game, presenting clear stopping points provides a sense of temporary finality and a much needed break from the action.

Unlike the GameCube title, Dark Moon sends Luigi to a variety of uniquely themed mansions completing lists of similar objectives separated into individual missions. Complete an objective by collecting the key or capturing a ghost and Professor E. Gadd brings you back to his laboratory to explain your next step. The lack of checkpoints and evolution from the openness of the first Luigi’s Mansion make these trips back to Gadd’s laboratory a perfect opportunity to break from the unchanged methods to capture ghosts.

When you finish the list of missions for a mansion, you will face an always completely different final boss that introduces creative ways to use Poltergust 5000. Some fights will require you to pick up and shoot items with the Poltergust or more specifically, pull on a loose thread dangling from a deadly staircase. Some fights, before you begin to capture the ghost inside each boss’ protective shell, you must first solve a puzzle or complete a mini-game that leads to the boss room. In my 15 hours with Luigi’s Mansion: Dark Moon, I defeated each boss fight and continued onto explore each new mansion with an anxiousness to see what new boss I would face next.

While exploring each mansion you can interact with objects in a couple of ways that as a result, develops a routine.  You can shake an object, shine your flashlight or your Dark-Light (a light that reveals hidden objects) or suck with your vacuum to see an object somehow react. Objects in the environment reveal coins used for the few upgrades to your flashlights and vacuum. But finding the more hidden collectables through less obvious means brought this sense of satisfaction and pride like no one could match my treasure hunting abilities. The cleverness yet simplicity of the secret treasures, like a hidden door opening if you spin the ceiling fan, made me wish that the core puzzles provided a greater challenge rather than the straightforward nature of their design that won’t hinder further progression.

A lot of these hidden secrets only add to the creativity and charm Dark Moon consistently carries. Even with the limited dialogue from Luigi, his often clumsy movements and easily frightened demeanour distinguishes him as more than just the brother to Mario. When you get a chance to observe the ghosts through the cracks in the walls, you see that they too goof around like using bathrooms, painting pictures and laughing at each other’s clumsiness; Dark Moon brings levity and personality sorely lacking in most games.

Regardless of the charm, the game does not come without some frustrations. As an evolution to a console game, I immediately wanted a second analog stick. Since you cannot aim your vacuum or shine your flashlight while simultaneously moving, limited control inputs makes ghost encounter needlessly difficult. Aiming the vacuum or flashlights requires a lot of stopping and repositioning to properly aim and even then, if the ghost moves too quickly, capturing them becomes this clumsy mess of running in circles until you find a manageable angle.

Another control issue, more along the lines of confusing rather than frustrating, involves the occasional use of the gyroscope. Some sections require you to tilt the 3DS side to side to stay balanced while crossing a thin beam, or tilt up and down to angle the vacuum or flashlight. To ignore all of the motion gestures, except for the balance beam sections, you can use also buttons. But why even provide the option for motion gestures for screen with a 3D effect that requires absolute stillness? The depth the 3D effect gives to each room looks great when you find that sweet spot so I don’t understand why they would assign core functions to gyroscope. The buttons provide an alternative to the tilt controls, though not a better control method that the precision of an analog stick and buttons allow.

Full of charm and personality, Luigi’s Mansion: Dark Moon won’t challenge with its puzzles or expand on the methods for capturing ghosts, but exploring each mansion and searching for secrets to then reach that always fantastic last boss, makes the trip worthwhile. I can’t quantify if the decade long wait for Dark Moon will fulfill dire fan’s wishes; I can’t even remember why I even wanted a sequel in the first place. Forget its GameCube predecessor and Luigi’s Mansion: Dark Moon becomes another quality game in the quickly growing library of fantastic 3DS titles.