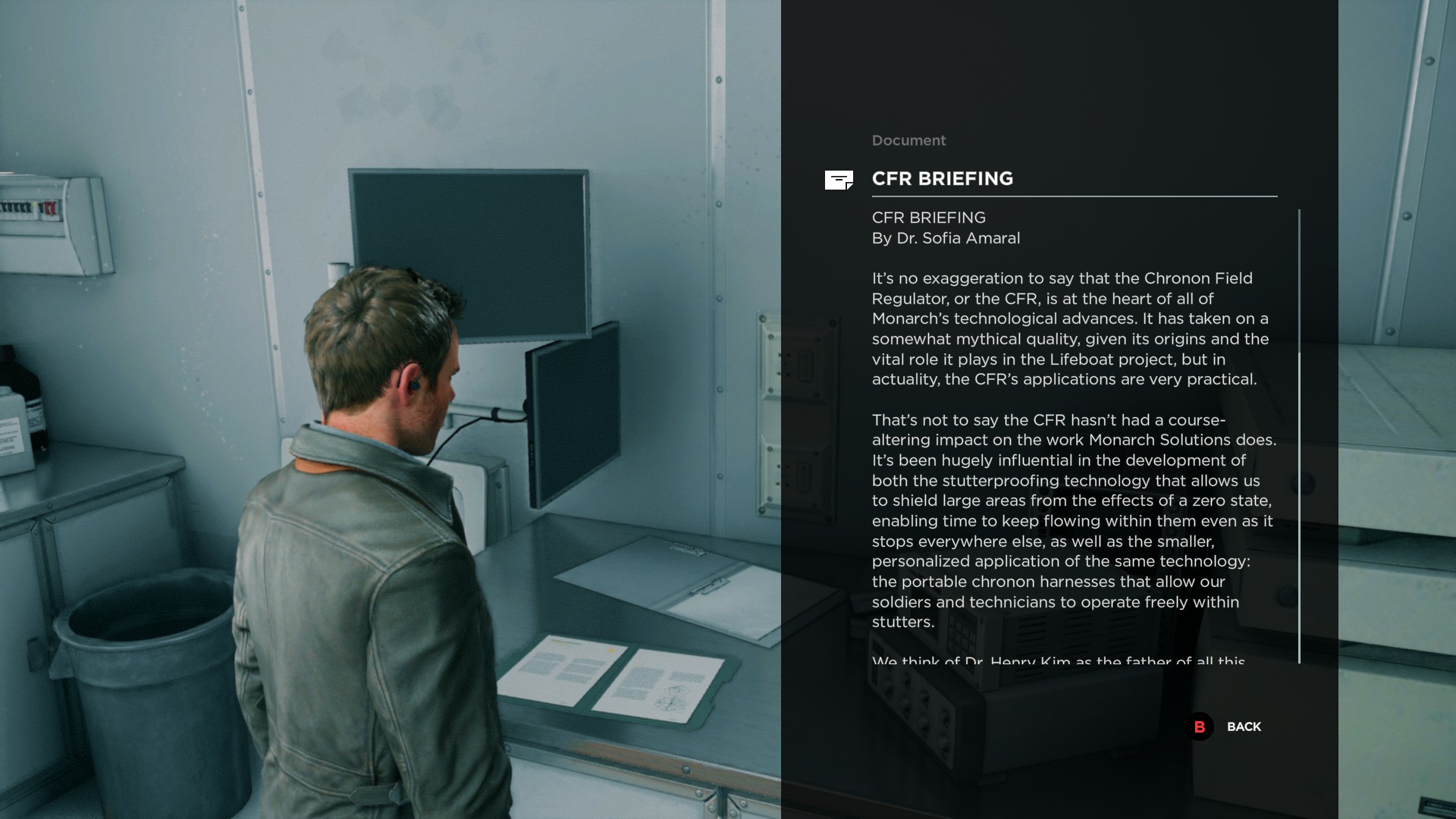 In Deus Ex: Mankind Divided, I snoop in everyone’s email. I’ll break into an apartment, steal all the valuables then hack the computer. Their inbox of work emails, store promotions and angry exchanges tell a private, sometimes embarrassing story. It’s a story about a person, not a corporation, building or event. Unlike the emails, I ignore those documents explaining the world like a travel brochure.

Games use collectible documents to expand on the narrative and for worldbuilding. They bring details not shown through cutscenes, characters and environments. Collectible documents provide flavour text – any information not key to the overall story. They exist for enjoyment and curious players. Although not necessary, you will benefit from knowing.

Whenever I enter a room full of notepads, books and letters, I vacuum all the collectibles and move on. I collect them to clear the room, not because I plan to read them later. I stopped reading the written pieces. It interrupts the gameplay pacing and diverts focus onto another topic. Although I want to know more about the world I’m playing in, I also don’t want to stop playing.

I don’t read while playing because it’s an inconsistent experience. We don’t stop reading novels to watch a video about the location in the chapter. We also won’t stop watching movies to read a blurb about the time period of the scene. Collectible documents expand the fiction, but games need to incorporate that information into the gameplay, or remove it altogether.

Lore collection hurt Quantum Break’s pacing more than the information helped it. The time travel narrative unfolds around a day of in-game time, so an urgency nags you. Despite the dire situation the characters lament, you can stop to read every bit of written lore. The notepads and documents explored time travel concepts the characters didn’t understand. The collectibles felt required.

The collection and reading of lore creates an uneven experience inconsistent with gameplay. During my time with Quantum Break, I skipped and read what interested me, even though I wanted to avoid it all. I wanted to push forward. I played Quantum break for the gameplay and story, not to stop and read documents littered all around. Building lore then kept me in areas cleared of all objectives. On top of slowing my progression, the documents felt like a storytelling crutch. 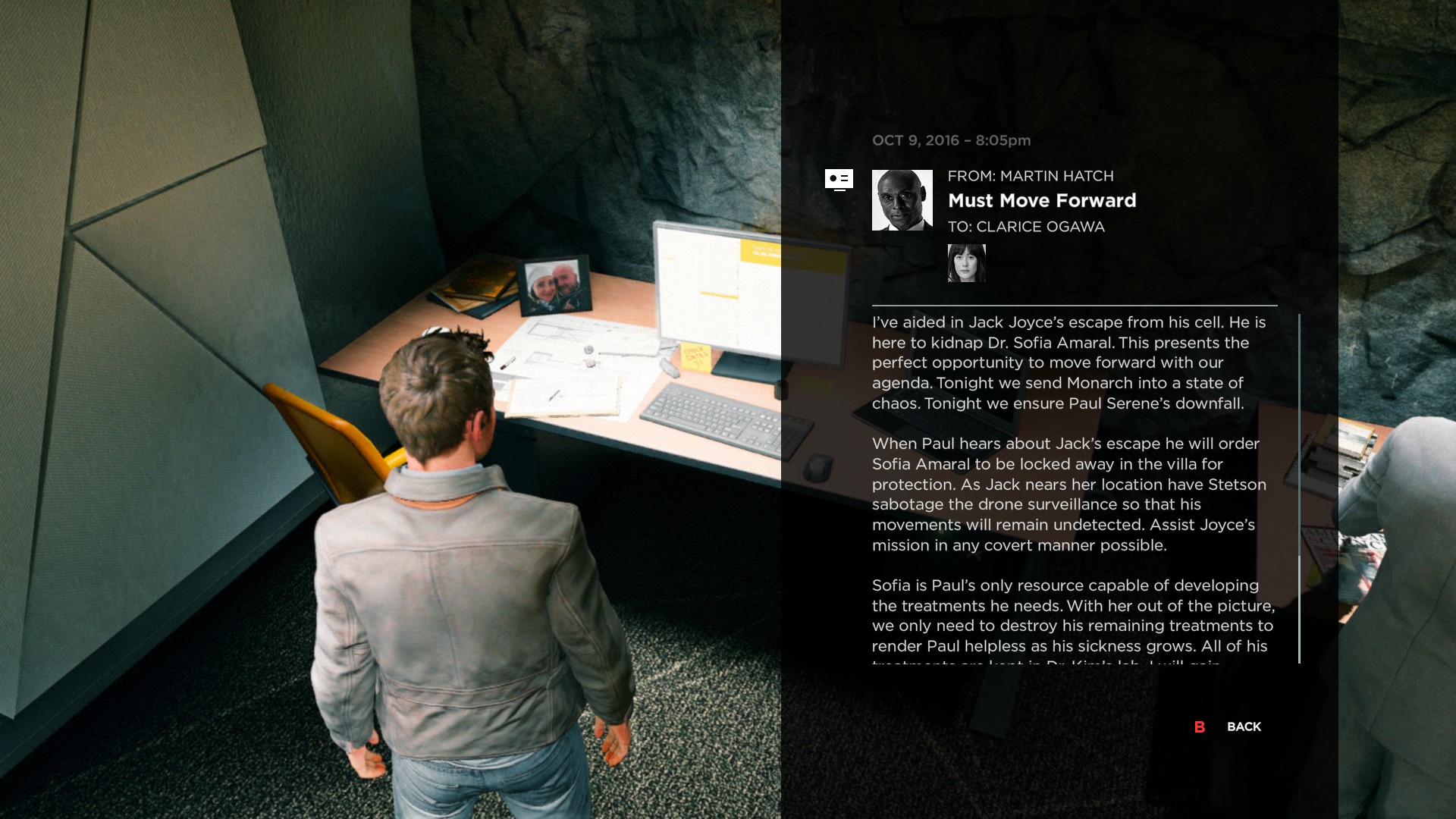 Key plot information in optional documents then becomes a crutch for storytelling. In Quantum Break, office computers displayed unguarded emails detailing the treacherous plans of your companions. The emails also built the necessary backstory for time travel, instead of using in-game cutscenes or conversations. I only knew about a specific character because I read it in a document. When they appeared during a cutscene, their significance made sense. Without prior knowledge, the game itself failed to portray gravity of the scene.

These key documents and personal emails felt planted and not organic to the environment. To find the most private emails in Deus Ex, I bypassed security then hacked the computer. The security measures matched the important content of the email. Inside you could find a passkey to unlock safes or computers. Although I skipped a lot of Deus Ex’s reading collectibles, they at least reward your curiosity during gameplay.

Quantum Break’s collectible documents felt like information dumps. If I planned to betray the boss I worked for, I wouldn’t use the company email server on a computer without a password. The Elder Scrolls V: Skyrim littered its rooms with giant books of lore. It overwhelmed the player. With shelves and shelves of reading in each room, it became impossible to read all while playing. A large text blurb on a table or shelf feels as insignificant and as boring as how to find it.

If the documents or books don’t affect gameplay, then display that information inside the game world. Cutscenes, dialogue and environments don’t interrupt gameplay and can still convey the necessary lore.

Deus Ex uses emails to tell stories, but also to reveal secrets or passkeys. You can find dozens of passwords, codes and lockers through email exchanges. While not all emails convey useful information, parsing those emails becomes part of the process. I raided many storage units because an email exchange shared the unit’s keycode and location. An offhand email comment works as well as an article.

Party members, security guards or any nearby person can help relay other lore. Main characters in games often work alongside someone, or at least communicate through a headset. When entering a new village, use party members to exchange facts about the place.

To detail a past event, weave it into a side quest’s conversation. Instead of a document explaining the new, neon covered skyscraper, turn it into a short quest. A small business owner complains about the light pollution, and asks you to take care of it. He explains the lights came with the new owner about a year ago, who started buying up local property. The quests keep the player engaged while providing interesting backstory.

Destiny tried to share optional lore through Grimoire Cards outside of the game. The out-of-game lore doesn’t interrupt gameplay, but it also requires you to go out and seek it on the internet. If you encounter an alien race, you want to know about them during that moment. Researching about the race afterwards doesn’t improve your understanding when you are most curious. In-game scenes or dialogue better supplement the encounter than a text lore read afterwards.

As a general rule, if the collectible document does not affect gameplay, display that information through the game world. Documents and notepads detailing a corporation don’t need long winded articles. A quest with a knowledgeable person can summarize the corporation’s backstory. Quests, dialogue and cutscenes maintain a consistent experience all while relaying extra world lore. Fewer collectible document might outrage the achievement hunter, but we can find something more exciting to do.