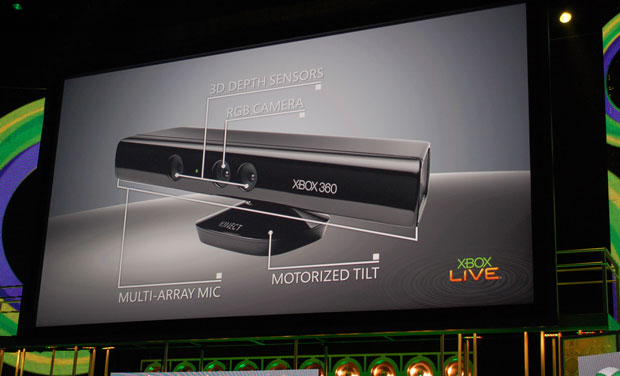 When I first saw Kinect at last year’s E3, I decided to at least give it a chance since it was taking the controller free approach to gaming. People speculated that while using your existing Xbox controllers, additional movements like grenade throwing could happen by moving your arm towards the screen.

Kinetic also features voice command which would be interesting to use if you could respond in a conversation by actually talking, not just picking an option in the dialog tree.

When they finally showed Kinect at Microsoft’s press conference, instead of showing how it could be implemented into games like Halo: Reach or Fable 3, they showed 8 games that your mom and sister would play.

I have never been to E3 before, but I’m sure the only type of people in the audience are people who want to see games where they can sit in their chair for hours only moving their fingers, not games where it shows you how to properly do a squat.

After banging my head against the wall for 45 minutes, I was left with no reason at all to put down the rumored $150 for something that could pause my movies when I say, “Xbox, pause”, instead of just pressing start on my controller.

Kinect just seems to be a tool to make lazy people even lazier. If I want to run on a track, I’ll do it outside. If I want to play soccer, I’ll go to my local park and play with all the kids. What

Microsoft has failed to do is give me a reason to buy Kinect, and with Sony aiming for the hardcore with the Move, and Nintendo releasing great title consistently, I don’t feel the need to add another camera or sensor bar on top of my T.V.