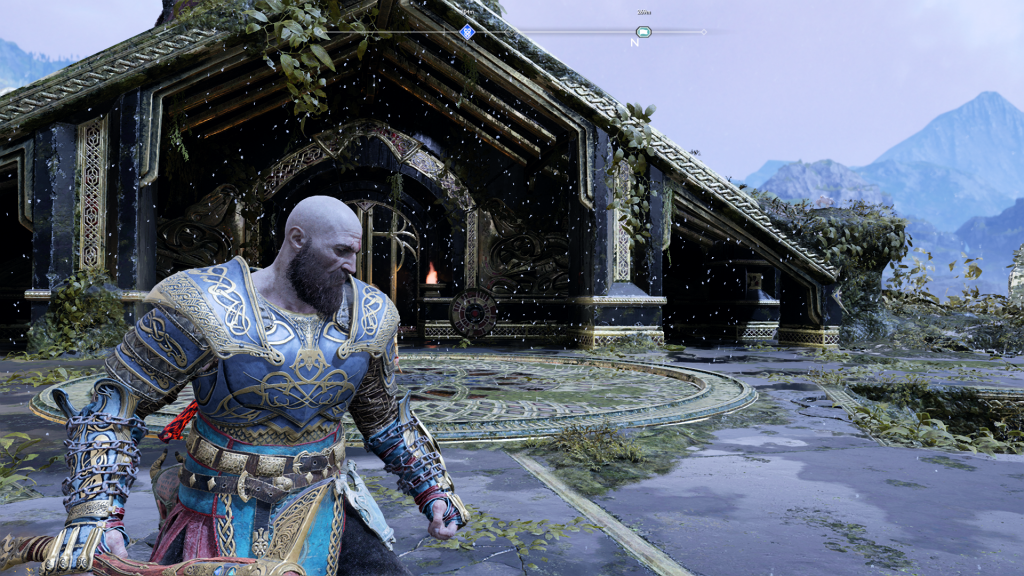 Like a life counter, mini-maps too came from a past era of games. Mini-maps helped navigation, but they became crutches as the game worlds expanded. With the mini-map in the corner of the screen, your attention shifts away from the world in front of you. The top-down map view provides more instant information than the in-game world itself. No matter the genre, you subconsciously start to play the mini-map.

Instead of removing the mini-map altogether, Guerrilla Games replaced it with a compass. The compass in Horizon Zero Dawn provides more than just orientation at the top of the screen. It shows the direction of quest objectives, save points and custom markers. The on-screen compass guides you without shifting your focus away from the world in front. The compass replacement benefits all sorts of genres, making it one of the best, most subtle improvements for games.

Horizon Zero Dawn and God of War (2018) both ditched traditional mini-maps in favour of the compass hybrid. God of War’s hub-world benefits from the compass despite funnelling the player down narrower areas. It shifts focus back to navigating the terrain rather than plotting your path along the mini-map. Ubisoft too moved away from mini-maps in Assassin’s Creed: Origins. As the Assassin’s Creed games grow larger and denser, you don’t want to stare at the corners of the screen.

The mini-map watching, in open-world games especially, extends to other genres too. The Forza Horizon series offers the best racing on the market, but it depends too much on mini-map driving. Open-world driving routes means terrain goes from road, to grass to sand all in the same race. Unlike driving a circuit race on a track, the driving path doesn’t always seem obvious. Flags, flares and signs help direct racers, yet you still need the mini-map to telegraph upcoming turns.

Ubisoft’s The Crew implemented the best navigation tool available for open-world racers. Similar to a driving line, a navigation line floats above your car. It guides you along the track during races or guides you to your next objective in the world. In Forza Horizon I often used braking lines more as a navigation tool rather than driving assistance. A navigation line shows upcoming turns without looking at the mini-map and looking away from the cars in front.

Grand Theft Auto V, although not a racing game, puts you in dozens of cars to drive the mini-map. The single player story requires driving from location to location – poor open-world design. You won’t find anything without following the mini-map grid for the complex city. Instead of learning streets or using landmarks to orient yourself, you instead watch the arrow in the corner of the screen.

Your game sense should identify and process information instead of explicit in-game HUDs. Call of Duty, Halo and other arena shooters relay information through mini-maps. In Call of Duty, enemy shots reveal their location on the mini-map. Players don’t need sound direction or need to think about spawn points; the game removes a huge tactical component. Players end up abusing mini-maps rather than searching for sound or visual cues.

Small modifications can change the entire way players behave in games. The slow, yet not fast enough, departure from the mini-map shows the industry’s maturation. Instead of following already established ideas, we need to keep challenging and questioning design. While some Sony studios adopted the compass for navigation, games like Days Gone still use a mini-map. Even Microsoft’s zombie game, State of Decay 2, follows old ideas. These small changes might seem insignificant to most players, yet they alter the whole feel of exploration and navigation.