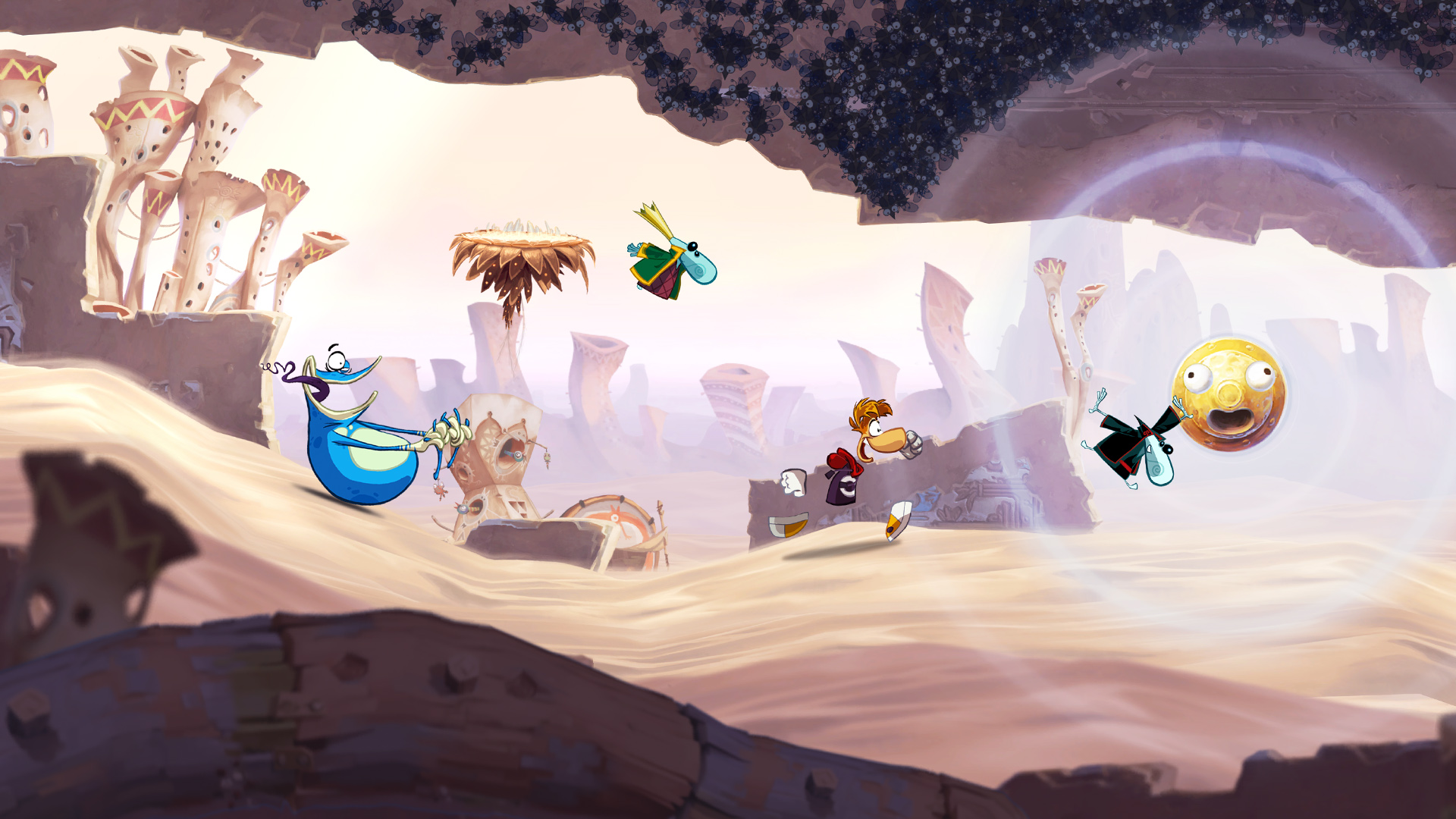 The PlayStation Vita was largely advertised in the gaming sections for Fan Expo 2011 in Toronto, it would end up being one of the more motivating factors to attend the show. According to the volunteer at the Uncharted 3 booth, the guy who was supposed to bring it from the U.S cancelled last minute and never arrived at the show. So with the showcase I looked forward to the most no longer a factor, I looked towards the small selection of games to ease my disappointment. Amongst the lineup of titles like Batman Arkham City, Assassin’s Creed: Revelations, Gears of War 3, Halo Anniversary, Resistance 3 and Starfox 3DS, the one game I oddly enjoyed the most was Rayman Origins.

There was only one demo station for Rayman Origins; it was placed off to the side into the corner in the Ubisoft both with usually only a few people playing it. The line for Assassin’s Creed: Revelations was too long especially since it was a multiplayer demo, so my friends and I played Rayman Origins instead. I first saw it at E3 being played cooperatively, and it looked like a lot of fun to work together with your friend, until I found out Ubisoft wanted to charge $60 for a 2D platformer that looked like it belonged on PSN and Xbox Live Arcade.

I went through a couple of levels, not at all feeling rushed as there was no one waiting behind me anxiously wanting to play. I selected a desert themed level filled with sand and large amounts of flying bats that blocked the tunnel and me, from progressing. To get through the deadly flock of bats, I had to punch a bell looking object that created a temporary circular light barrier around my character. I had to move quickly as there was tons of ground to cover and very little light to run with, light that would disperse the bats. It was difficult for my friend and I to reach the safe platform, it involved a lot of precise platform hopping and wall jumping, leaving almost no room for error.

After respawning from one of our many deaths, I swung and missed the bell but had no time to try again as the bats surrounded us. I had no other choice but to stay glued to my partneras he was my life line. It wasn’t a mechanic specifically created for one person to use; it was a situation that happened because of my terrible aim with Rayman’s fists. From the levels I played, I never had to rely on my partner to progress; it was an experience where you could continue forward individually. To adventure forward alone with the help of your friend whenever needed, since they could pop the bubble in which you are brought back into the game with, after you have died.

After we completed the level, our third friend stepped in and I remained. We selected a jungle themed level; this time there were significantly more enemies to knock out of the way then the previous bat populated level I just completed. The platforming, still difficult yet not impossible, was just as important as clearing the way of the skinny old witches. Ground pounds and punches were needed to stay alive as we navigated through the tight spaces, swinging from vines and hopping from one small platform to the next. When I missed those small quickly moving platforms I never felt angry or handicapped because of the controls, I was accepting of the fact that I had just jumped too early or too late to make it to safer ground. 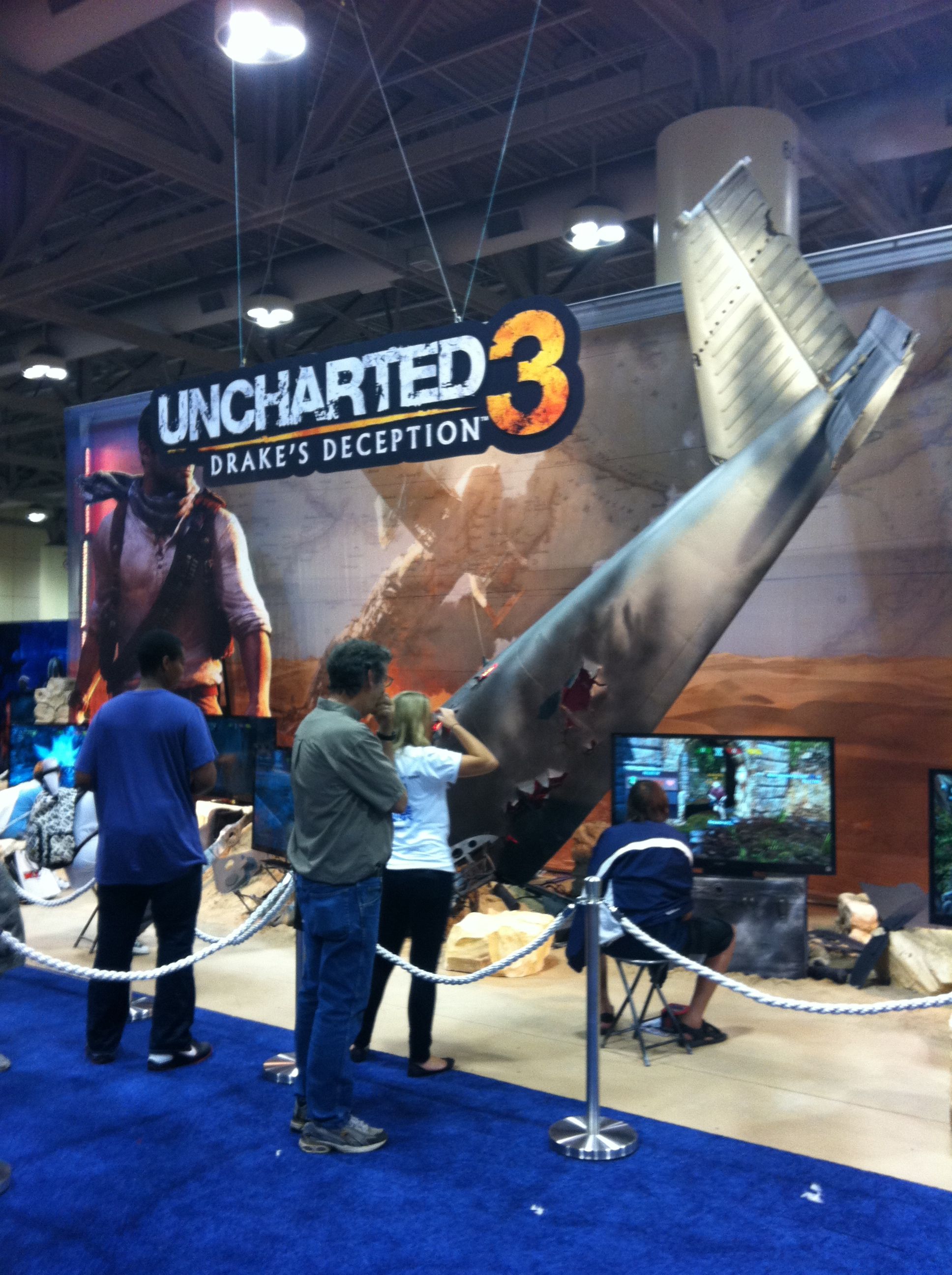 The other games weren’t something I haven’t seen before from other gaming expos, so it’s not really worth talking about Gears of War 3’s Hoard mode, Uncharted 3’s multiplayer or Assassin’s Creed: Revelations. The games I did play were certainly enjoyable with the limited time I spent with them, but I didn’t leave the show more excited to play (with the exception of Rayman) any of the coming titles. I was however most impressed with the hardware being shown by Sony. It doesn’t forgive the fact that the PS Vita never even arrived at the show, but I didn’t expect their split screen 3D T.V to be as impressive as it was.

To my knowledge this T.V – announced at Sony’s E3 2011 press conference and priced at $400 – would provide a 3D experience when playing a split screen game. It obviously wasn’t conveyed properly as it actually makes an overlay for each player.What this means is that each player, with the help of the 3D glasses, can see a single picture for themselves without actually splitting the screen vertically. We got to play Wipeout HD, we were both able to race our vehicles using the full screen, yet it only involved one T.V. The technology was unbelievable; I could see the problems of sharing a console with a sibling or friend no longer becoming the impractical way to experience a game. Screen watching in first-person shooters isn’t a factor anymore, the idea alone of being able play a cooperative experience without sacrificing half the image is in itself a great reason to purchase Sony’s new television. The market for this T.V might not reach out to every single person who owns a console, but for those would hate sharing with their siblings will be all over this technological advancement.

On the other hand, Sony Was also showing the prototype of a virtual reality like headset. This headset that was covered in black electrical tape featured 5.1 surround sound and 3D OLED screens for each eye. The sensation was like sitting alone in a theater, instead you were shooting off rifle rounds in Killzone 2. It was clearly a prototype. It didn’t have any head brace, it was front heavy, the design wasn’t practical for everyday use, considering the supervisor claimed that it could replace your T.V. Obviously the price is large factor if I were to at all to consider buying this product, so when he asked us how much we would pay, I felt like $150-200 was totally reasonable, though the look on his face showed that we were in disagreement.

The show overall was underwhelming, but I think my expectations were way too high considering it is a convention for many different genres.  I was pleasantly surprised by Rayman Origins and Sony’s 3D split screen T.V. With PAX – a dedicated gaming convention in Seattle – occurring on the same weekend as Fan Expo, I couldn’t help be feel like I was in the wrong place, that I haven’t even got a taste of the electric atmosphere, and I don’t mean taste of the terrible B.O of the gaming enthusiasts at the show. Like the other people in Seattle, I got to play some games that haven’t even hit store shelves yet, all the while being with friends who share a similar passion for games. There could have been a lot more panels to replace the time we spent just aimlessly walking through the many isles of comics and action figures, though I understand that the show is still evolving. It might piss me off when people stop directly in the centre of the isle to take a picture of the girl dressed as Poison Ivy or the guy walking around with a Portal gun, though it didn’t mean I didn’t enjoy my time, it just made me more motivated to attend PAX East in Boston next year.