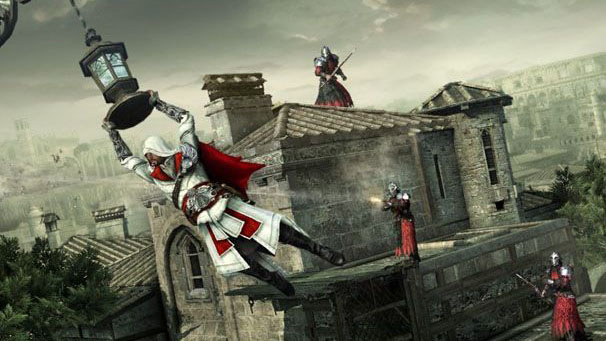 As I wandered the city in Assassin’s Creed, in the distance there was an enormously tall tower that was screaming at me to climb it. There is something about 3D platforming and structure scaling that always delivers so much satisfaction, one reason to explain why I currently adore inFamous.

So if I love platforming and climbing a building to the highest point, to then jump off into a bale of hay, then why am I not that excited to play it? Improvements to combat have eliminated approach of waiting for the enemy to attack, in order to counter it, and all of Rome is available for the player to explore.

Did I mention Ezio is an awesome character? Possibly one of the most badass game characters I have played as, yet whenever the opportunity arises to buy Brotherhood, I just shrug my shoulders and do something else.

I know I am not the only person in the world who has been showing symptoms of this unexplainable mental disease, because some of my friends express similar feelings. Assassin’s Creed Brotherhood looks fantastic, and is probably one of the best games this year, but I think I’ll wait just a little longer before I pick it up.