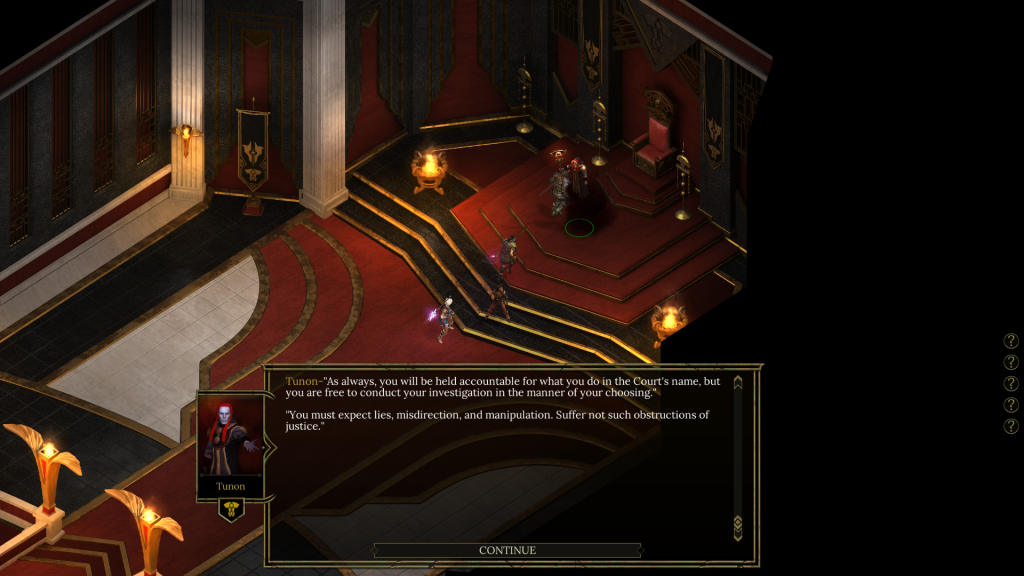 In Tyranny you play as, well, a tyrant. Your Fatebinder status grants the freedom to break the fantasy kingdom’s laws. As long as you feel comfortable answering for your actions, you act as you see fit. Your goal, as requested by your overlord, is to conquer the rest of the world. Along the way, your decisions ruin lives, destroy homes and kill civilians. Unlike most games, your decisions rarely result in peaceful resolution.

Games with story decisions should operate like Tyranny, forcing the player to make tough choices rather than binary ones. Mass Effect offers the “good versus evil” approach, rather than presenting challenging decisions for the scenario. But with many games, the significance of your choices varies.

Not all games need meaningful story decisions with branching paths. Some games thrive with varying dialogue options to sustain player interaction. Important story decisions and dialogue options shouldn’t present good or evil positions, but instead challenge the player’s morals. Each scenario should present uncertain resolutions. The story then depends on the player to choose, in their view, the best result for the problem.

Tyranny’s antagonist structure lures the player into many moral traps. With the goal of conquering the land of Terratus, it means destroying villages and killing people. What alternatives exist when you must destroy a library’s forbidden knowledge the enemy intends to capture? No matter your decision, someone suffers.

Dragon Age: Origins presents tough decisions without positioning you as the antagonist. Instead of the moral right or wrong decision, you choose from a list of uncertain approaches. In one story quest, Wynne, my healing mage, left my party because she disagreed with my plans. As captured, deadly mages threatened my progress, I decided to kill them. Wynne disapproved and joined their side in defence. She died along with the mages.

Tough decisions in Tyranny and Dragon Age impact the story, leaving moral questioning up to the player. Quests with binary “good or evil” decisions don’t provide true agency as it results in polar opposite outcomes with no room for grey area. Tyranny lets you hedge decisions or conversations, but it can backfire. The refusal to decide or speak may turn everyone against you, putting you in an even more difficult, compromising scenario.

The word “empty” to describe a game’s decisions or dialogue sounds critical, but they serve a specific purpose. Empty decisions act as colour for the conversation and increase player agency during discussion. When a character asks a question, the responses you give won’t affect the outcome of the conversation. Your dialogue choice might garner a different reaction, but it returns to established events.

Games like Pokémon and Yakuza 0 use empty decisions and dialogue to increase player agency during certain scenes. Pokémon dialogue options, at most, garner a different reaction from characters. The main story and side quests don’t change. With player dialogue options after every few screens of conversation, it works to keep the player engaged and listening.

In Yakuza 0, the substories offer different dialogue options without real consequences or change. Characters react differently to your bold claim or reserved statement. Your choices alter the flow of conversation, but they do not change a substory’s result. The reward does however change depending on how much you work to complete the substory objective.

As players progress through games with empty decisions and dialogue, it becomes apparent your choices don’t change the story. Towards the end a game, or at story junctures, some games then introduce consequential decisions. These story altering decisions feel the same as the empty decisions. To avoid player confusion, games designed around empty decisions should distinguish and alert of story-altering moments.

With higher Lore attributes, you can throw logical or informed comments at your conversation partner. These dialogue options reveal past events or established laws not obvious to the player. Think of the lore dialogue options like a lawyer feeding you new information during an argument. You learn about the game world before applying the newfound knowledge.

Time-based decisions alter pace and encourage constant attention of in-game events. People playing on autopilot may botch a tough scenario and leave with an unintended result. You could also wait and let time expire, but hedging, as displayed in Tyranny, leads to unsatisfying results.

Time-based decisions inject a stressful type of decision making into games, yet many games exclude them. Variety always improves the experience.

While empty decisions feel insignificant compared to story altering actions, it keeps the player engaged. Instead of sitting during conversation and watching, the player feels involved in some way. The smallest involvement always beats passive gameplay. Not all games need decisions, but story-based games benefit from some kind of dialogue participation.