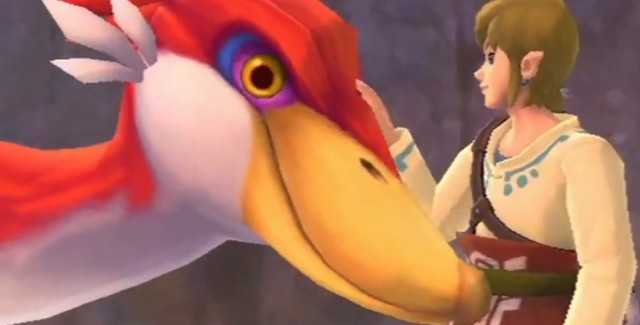 Twenty five years of Zelda. That’s a lot of potions consumed, boomerangs thrown and rupees collected. And nothing is more appropriate to celebrate the quarter of a century existence, than to do it with a Zelda game in which embodies the spirit and structure the best installments in the franchise had. Most game enthusiasts often look back at games like A Link to the Past or Ocarina of Time as the important games in the Zelda timeline. Ocarina of Time is widely regarded as possibly the best game ever made because of what the game had done with its use of time travel and creativity. The overall design was years, maybe decades ahead of its time. Even today, aside from the visuals, it is nearly impossible to find a game so cleverly crafted and well thought through. But the newest Zelda, Skyward Sword, doesn’t impress or amaze like it’s previous installments, but provides a familiar experience to players who are looking to enjoy the time spent with Link. Zelda: Skyward Sword utilizes all the right tools in making a recognizable and well crafted Zelda experience, and even slightly evolves from its set in stone formula.

Combat has always just been mashing a single button or waggling a controller, never at all changing from the moment you are first given a sword. Skyward Sword instead makes the combat a focus of the game with the help of the Wii Motion Plus. Since the Wii Motion Plus can track specific hand movements, the combat has developed a new layer to consider. This layer consists of your reaction for when to slash horizontally, vertically, diagonally or a straight stab. The many different directions have allowed the enemy encounters to be dynamic and very involving, forcing you to pay attention to how your opponent wields their weapon. Say for example, an enemy who wields two swords vertically, you would swing vertically between the swords, to hit unprotected space. The sword fighting is not very engaging with regular enemies, though really becomes rewarding when fighting bosses or stronger enemies with distinct characteristics.

The boss encounters required a lot of attention and patience to successfully complete. The intimidation of your enemy’s size or strength, combined with the ultimate dependence on your well executed and timed slashes created intense battles. I often found myself sweating not just because I was constantly raising my shield by thrusting the Nunchuck forward, but because of the tension and nervousness created when I was trying my hardest not to get hit with the few hearts I had remaining. Movements such as thrusting the Nunchuck forward to raise your shield, slashing in every direction to hit exposed parts of the enemies and even pulling the string back on your bow with the Nunchuck, are ideas early Wii owners only dreamed of. And although many of the gestures have been seen in other games before, they were never brought together and put into a single experience. There are only two games that I think actually used motion control to its full potential, the first one being Silent Hill Shattered Memories, the second being Zelda: Skyward Sword. 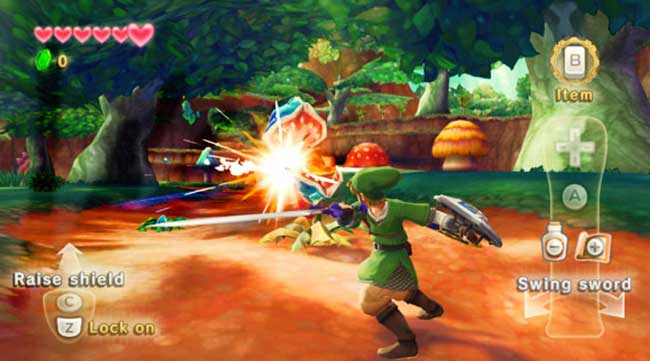 Skyward Sword doesn’t excel in every aspect of its design as some of it feels dated. One thing that bothered me the entire time was lack of voice acting. Not saying that they should voice Link since you never read what he says anyways, but if Nintendo goes out of their way to animate a characters mouth movements and gets people to record some grunts, groans and moans, why not just get them to read some lines while they are there? Nintendo is a huge company, there is no reason why they can’t go out and find a great voice actor to further support their already great story. The cinematic approach with this Zelda game is a huge leap forward for the franchise, but it feels wasted when you have to read the dialogue the entire time. Unexpectedly, there were cinematic moments that brought me chills, a feeling I never felt while playing a Zelda game, or very few games for the matter. That extra level of emotion that could be conveyed through expression and tone of voice prevents this story from being truly memorable.

A certain feeling that I vividly remember was my gradual increase of annoyance to travel by sea in Wind Waker. Identical to Wind Waker’s boat travels, flying your Loftwing in Skyward Sword is cool and invigorating the first few times, but quickly becomes a bother. When you just start out and the plot is still developing, you won’t mind travelling from the central hub to outer locations, the goal is not very focused. But as the plot progresses and you pass the familiarizing stage of the game, you just want to get to places faster and just get started on your next objective. This is further enforced by the fact that aside from a few small islands, there is nothing worth while exploring. In the context of the story the way the world is divided makes absolute sense, though it doesn’t make it any more enjoyable.

Once you have arrived at your destination, the core of the game – extensively exploring the temples – is what you will look forward to. Skyward Sword doesn’t have the most complex and difficult dungeons or temples you will ever solve, but the clever level design that you may only find in a few other game franchises is what makes Zelda so special. There might be those instances where you will say to yourself, “This chest is definitely the dungeon map” or “This is where I get the bow” and will be right, but the addition of new equipment will surprise you. With the new equipment you can also upgrade it through the items you collect through your travels. It is a simple upgrading component with shallow depth, though changes to the formula are welcomed. 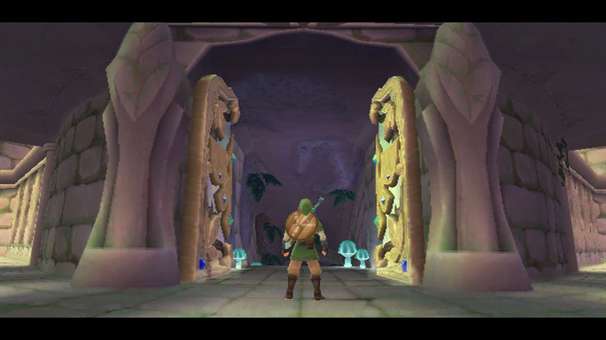 A change I would also appreciate is the awfully sluggish start to the game. It may seem out of order to speak of the beginning nearing the end of this review, though it wasn’t something I wanted to start with, as the overall experience is not significantly tarnished because of it. The first 10 hours were a definite grind to get through, and patience on your part would be recommended. As you slowly start to prepare yourself for the journey ahead, the story develops, creating an emotional connection between characters. This sluggish start was essential to the plot, it made characters like Zelda actually have an important role, allowing her to become more than just a princess or person of importance that needed saving. Throwing you into the first temple would have avoided this slow start, yet at the same time the story would have suffered from it. After the 50 or so hours it will take you to complete the game, those slow 10 hours will is worth trudging through if you’re a fan of great level design.

Trying to find a game that comes close to replicating what Zelda has been offering for 25 years will be difficult to come by. Although Skyward Sword doesn’t take the plunge and completely submerge itself in modern game design practices, the use of Wii Motion plus and its implementation for sword fighting provides a combat experience not easily possible with traditional controllers. Each boss is so radically different from the previous one, and getting through the intricacies of each dungeon will be what you will appreciate most while playing through Skyward Sword. 25 years is a lot of time to refine the recipe to concoct the most memorable experience, so hopefully Nintendo can take their achievements in storytelling and combat, and use what they have learned to further improve the franchise. But for now, in the 25th year, Skyward Sword will easily fill the void until whatever the next journey Link will be taken on.