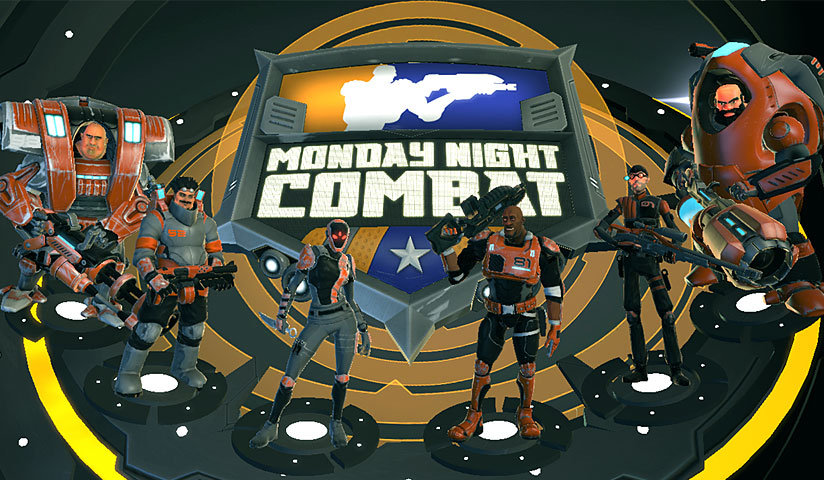 The main mode in Monday Night Combat is Crossfire, a 6 versus 6 game type where each team has to protect their Money Ball from being destroyed. At each base there are numerous predetermined spots where you can build one of four different turret types, to defend your Money Ball from enemies and incoming robots. Robots spawn at each base which then follows a predetermined path to the enemy’s Money Ball. They are very important because only they can take down the Money Ball’s shield before it can be damaged.

In order to buy turrets you need money which can be obtained from kills, or picked up from destroyed robots. Not only can you spend money on turrets, but you can spend money on skills for your class upgrades. There are 6 different classes that each has 3 active skills and 1 passive skill. Even though each class is different in many ways, it feels very balanced. Each class can hold their own ground in a firefight, and have unique skills that are needed in order to win.

My favourite class is a tie between the Tank and Support. The Tank is really good at short and longed ranged combat, which can also set enemies on fire. The Support is excellent for upgrading or hacking turrets, which can also heal teammates, damaged turrets and robots.

The classes are very diverse and provide something different for every type of player. Although there is no story in Monday Night Combat, Uber Entertainment gave some personalityto each character and the environment around them. Monday Night Combat tries to replicate a futuristic game show with things like a Mascot and an announcer, and does a great job of doing it.

While Monday Night Combat is multiplayer focused, it also provides co-op for those people who aren’t very good or interested in versus multiplayer. In the mode Blitz, 4 players team up to destroy waves of robots in order to protect the Money Ball from being destroyed. This mode can also be played co-op, and for a $15 XBLA game, it actually is a lot of fun.

For $15 Monday Nights Combat’s multiplayer is very deep with customizable classes, skill sets and game variety. Since there are many factors to winning such as destroying robots and building turrets, you will always find something productive to contribute to the team. The inclusion of a co-op multiplayer mode is just an added bonus to this action packed, refreshing multiplayer game. If you need to fill sometime between now and the next huge title, then Monday Night Combat will not disappoint.