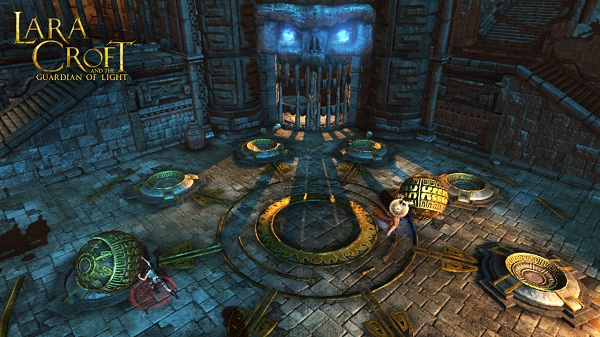 The Tomb Raider name is attached to games that aren’t known for being solid experiences, so the name is viewed by many to be part of an underwhelming and dried out series. Lara Croft and the Guardian of Light is an attempt to rejuvenate the Tomb Raider brand without having people write it off as another Tomb Raider game. With the camera now pulled overhead and twin-stick shooter mechanics implemented, it does enough to change how Tomb Raider games are played, but it doesn’t do enough to get you excited about playing it.

Cooperative play is the main focus in Lara Croft and the Guardian of Light, but unfortunately you can only play split screen until a patch is released in late September, which will include online co-op. While some people don’t mind playing split screen, it’s something that I tend to avoid because I like to play games on my own time. After making the choice to go at it alone, Istarted the campaign and was brought up to speed about what was going on in the story. The story in Lara Croft isn’t interesting at all, and the game recognizes that so it puts you into the game quickly, getting you to the stronger sections of Lara Croft.

The best part about Lara Croft is exploring the environments looking for upgrades and Artifacts which increase and or decrease certain attributes. This really encourages you to explore, and also put your skills to the test in the optional challenge rooms. Within the levels a tomb will consist of a puzzle that when solved will leave the treasure unguarded. Though the Artifacts add another layer to your character, I often found myself not switching Artifacts because they were often duplicates, or inferior to the one I had equipped. If you’re not the type of person who likes to explore, every new level will have challenges that you can complete for a reward.

The combat inLara Craft works like you expect to. You aim in the direction of where you want the bullets to go, and they go there. Equipped with guns, gadgets and bombs, it allows you to be somewhat creative to how you go about killing the enemies, at the same time not over complicating things. You will find numerous new weapons, however even though the stats look better, it doesn’t feel like it. The wide variety of enemies keeps the battles interesting, since you will change your approach for the different situations. When there isn’t anything to kill, you will be exploring the beautiful environments, even if it’s destroyed to a pile of rubble.

The trees look full of life, and the green shrubs really stand out when combined with the rocky terrain. Lara Croft doesn’t aim for super realistic visuals, so imagined enemies or environments don’t look ridiculous or out of place. While this game does look fantastic, I wish I could say the same about the music. When you’re trying to solve a puzzle and are thinking about what you are going to do next, the music can be really irritating and annoying.

Lara Croft and the Guardian of Light is a new take on the Tomb Raider universe, though playing it is not all that interesting. There are some great moments in Lara Croft that I wish the game focused more on, instead of the somewhat mindless twin-stick shooting. Although built for co-op, you won’t run into any problems when playing alone, but it’s quite disappointing that there is no online co-op at launch. The five or more hours you get out ofLara Croft might be just what Tomb Raider die-hards wanted; it doesn’t negate the fact that there is nothing exciting about this very functional, alright game.