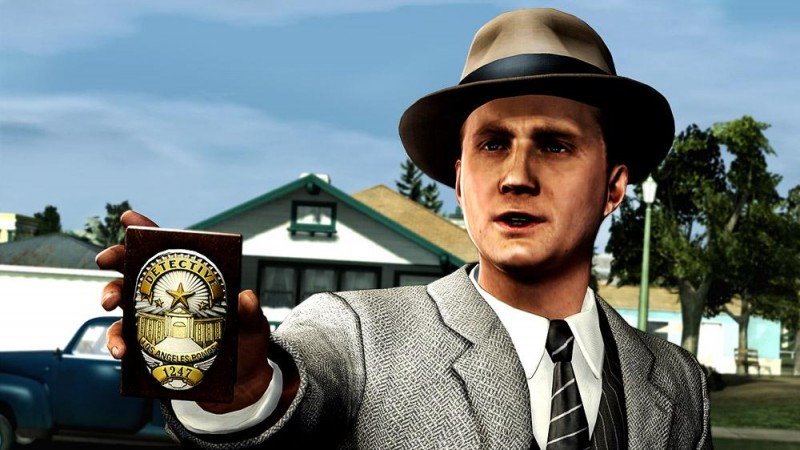 Instead of developers relying on hardware strength to produce higher fidelity graphics, they are finding ways to optimize their game engines, to then use these new found tricks to replicate something that would require advanced hardware. Team Bondi has recently developed this new technology that would allow them to capture little movements of the human face, similar to the concept of full body motion capture. This significant improvement of facial animation plays such an important role in Team Bondi’s and Rockstar’s detective story, that it’s unfair to dismiss this technological leap, even though it would have been better served as the supplement, not the core.

You play as detective Cole Phelps, a war hero who doesn’t feel deserving of the awards he had received in his line of duty. Looking to redeem himself, he will serve the people of Los Angeles by joining the police force, resolving the problems on the streets, working his way through the different detective desks such as Homicide and Arson located in different parts of the city. The progression to different desks was what I was most excited about, though when I finally arrived to the next desk, it felt exactly the same.

Cases are approached in the same order; investigate the scene, find clues, and then interrogate suspects or witnesses. Scanning the scene for clues is frustrating with the third person perspective, as you will have to maneuver the camera around Cole’s body since he often obscures points of interest. This problem occurs more often in tight quarters, since the tank like controls will leave you to rely on sound cues and rumbling of the controller to reach that awkwardly placed evidence in a corner. As time passes, these assists during the investigation no longer represent hints, but a reliance to successfully find all of the available clues.  Searching for evidence at the crime scene sort of becomes a point and click game, except this time you will waiting for the sound cue or controller rumble, instead of mousing over objects until you find something that is clickable.

I wouldn’t have minded this repetitive and slow developing structure that each case has adopted, if they had just given more things to do in the beautifully modeled Los Angeles. They have this huge open world that is surprisingly detailed, like restaurants filled with people eating, but it’s rarely taken advantage of since the story follows a linear structure. The only opportunity to do something slightly entertaining to get away from the dull driving, is accepting calls from dispatch, which are detailing a situation that requires police assistance.

The suspects described by dispatch all react differently. Some will try to out run you on foot or escape in a vehicle, while others will get behind cover and shoot their way to freedom. Gun fights and chase scenes that occur during side missions and the main plot, are intense the first few times, as the camera will be shaking as you run, or your car will hit a huge ramp while you’re being led through the back alleys. By presenting these scenes less frequently throughout the story, the anxiety of chasing a runaway suspect through buildings and up drain pipes would have made those scenes memorable, instead of dull and repetitive.

Occasionally during investigation a clever mini game will present itself, where solving it will lead to clues. One puzzle required me to put together the pipes for a heating system, so I could rule out if the murder weapon came directly from the victim’s house, or from the murder’s own possessions.  If Team Bondi replaced some of the investigation or sweeps of crime scenes with intricate puzzles, I think it would have better represented the smarts of a detective. The sense of accomplishment when solving one of these infrequent but involving puzzles would have made the player feel more like a growing detective that is Cole Phelps, instead of a detective who can react when they feel their controller rumble.

The half way point is where the plot begins to show itself. I spent a lot of L.A. Noire thinking there was no real story, only shorter stories within each case. As each case was settled, and new ones emerged, people or events began to reappear, linking what seemed to be unrelated crimes. The plot threads don’t all come together until near the end of the game, leaving the first half without any conflict that would serve as the narrative from the beginning.This disconnect between two halves of the plot makes L.A. Noire – despite being only 20 hours – feel long and stretched out, something I was disappointed by since I expected an amazing story to be told through the realistic cast of characters.

Not surprising, but the best part of L.A. Noire are all of the great actors and actresses that were put into the game using the facial capture technology. I thought that after a certain point like many other new pieces of hardware or software, the novelty of the scary realistic facial animations would wear off, but it never did. The dialog was acted and delivered so realistically, making it quite simple to believe that these people were part of 1940s L.A. The technology isn’t perfect as it requires each person to be captured individually, in order for the 32 cameras to catch every angle of the person’s head. This isolation is what often accounts for Cole’s complete turnaround in personality during the interrogation.

I specifically remember one instance, where I was interviewing this elderly lady who was the landlord of the building where the victim of the case lived, and I doubted her response to my question was truthful. Cole then responds by completely changing his personality and begins insulting the landlord calling her an old hag, threatening to get police to bother her about the broken windows. So I sat there, taken aback by how out of place this was. It’s a shame too because the facial technology and the dialog is just spectacular and really is genuine to the era, but those moments where he comes out of character and flips his mood around, happened enough that it was becoming a problem.

Starting out, the recognition of a lie and the truth – what should be almost second nature by now – is tough to successfully determine. You will often misinterpret responses, but thankfully, wrongly accusing someone doesn’t punish you very much as the plot continues forward. No matter how poorly an interrogation unfolds, new leads or clues will always get you to the end of the case, it’s just a matter of how cleanly and well executed the events were that led up to that point. The fail safe system in L.A. Noire potentially avoids repeating the missions from the beginning, along with the memorization of correct responses to specific interrogations.

The overarching story in this modern point-and-click-esque adventure game might not be what you would expect from a heavily atmospheric open world, but the facial capture technology is just too awesome to just completely dismiss L.A. Noire. The execution of everything else around the interrogation is flawed to a certain point, but functions enough to be passable. If everything wasn’t recycled so often throughout the 20 hours of gameplay, those flaws would have been difficult to spot. The adventure game approach to L.A. Noire fits within what Team Bondi was trying to achieve, I just think by making it more of a puzzler, it would have properly displayed the smarts and cleverness that each detective requires to solve a complex case. If you were interested in the technology and how it would positively impact conversation and interactive storytelling, then your curiosity will be satisfied. Those who are expecting the craziness of the Grand Theft Auto games because of the collaboration with Rockstar, will be confused when they find rather dull combat and driving, in an open world that never even comes close to being fully utilized.