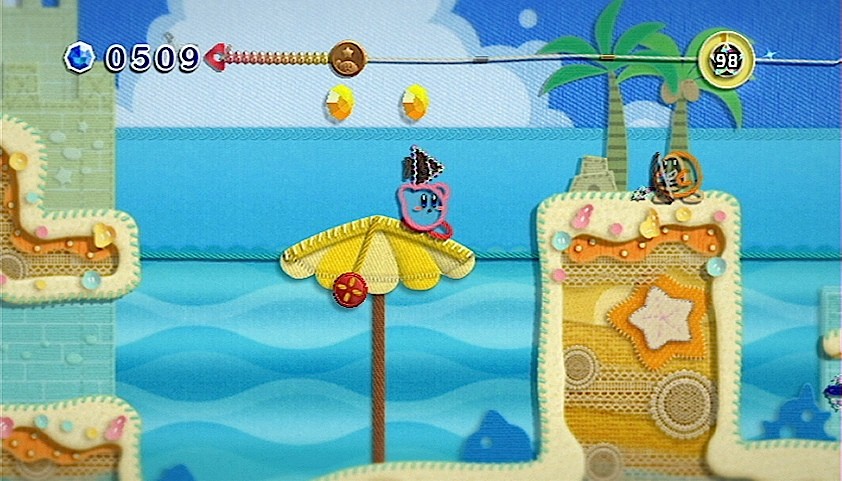 It’s ridiculous how in this current generation Nintendo can get away with selling a standard definition gaming console, when every other market competitor has moved to high definition visuals that can be seen at home on your television, or even on the go via a Smartphone or handheld device. Kirby’s Epic Yarn makes you forget about the amount of resolution lines or fancy retina displays, to focus your attention to the game’s art direction, rather than the smooth edges and realism of the characters seen in high definition. It can be difficult for some people to admit how they adore the little pink ball of yarn weaving across the screen, which shouldn’t happen considering that amount of creativity that can be acknowledged and appreciated by all age groups and genders. There are many practical ways to unravel, rip, cut or tangle the yarn that keeps Kirby alive and mortal, all of which are absent in a child friendly, and at times, boring experience.

Kirby wasn’t born made of yarn as something had to have happened to him for things to turn to bright colors and soft fabrics. A brief explanation of this transformation and the goal to reach the end was the only necessary story segment aside from the ending scene; it was all that had mattered. But often times throughout the game, specifically at the end of each world, there was a cut scene narrated by an elderly man, who would even do the voice over’s for each character. It was silly and childish; a description that I didn’t believe was a fair assessment for a game that provided so much creativity. Sure the difficulty curve was as flat as you could imagine, especially when compared to other successful 2D platformers on Wii like Donkey Kong and New Super Mario Bros. Wii, but to call it childish is a judgment based purely on the impression made by the cutesy art direction.

The game is not for kids or for people looking for an easier experience than Mario, which is what I was confidentially backing until the focus on collecting objects and furniture to fill your apartment, began to emerge as one of the core focuses of the game. Placed along each level are beads which are then collected and added to the piece of yarn, keeping count of the amount of beads needed to reach the next of three different medals. Hidden throughout the levels are items or pieces of furniture used to furnish Kirby’s apartment. I had no interest in playing the Nintendo version of the Sims, and I doubt anyone who has even considered buying Kirby wants to spend time rearranging and reupholstering pieces of furniture in their virtual apartment. 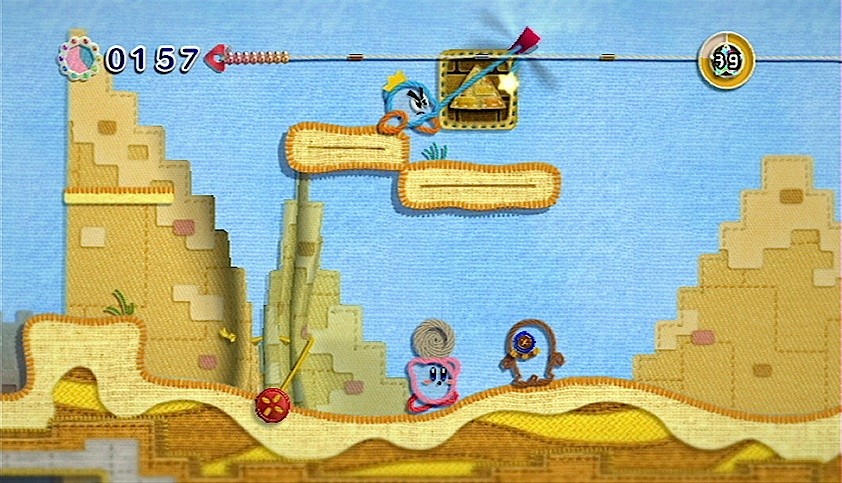 Even if you are remotely interested in this metagame, there is nothing to interact with. The most you could do is jump on some chairs as it’s only acts as a cosmetic feature. And with all the beads you have accumulated through each level, you can only purchase more furniture and fabrics, making the effort of collecting each bead pointless. The incentive to explore every corner of each level is to furnish your apartment, so if you’re not into that type of thing, actually, even if you are, it becomes bothersome to go out of your way for something that has no actual value. To the games credit though, collecting the beads and finding the hidden objects can be quite addictive, really only because of how clever and imaginative each level plays out.

The use of yarn, fabrics and stitching plays an important role in the game’s mechanics. Instead the traditional Kirby that’s sucks in his enemies, Kirby uses a piece of yarn to unravel his enemies or roll them into a projectile. Kirby’s yarn is also used to manipulate the enjoinment, actions such as pulling a thread to shorten the gap, or revealing items behind patches of fabric that can be peeled off. The option to knit through Patch Land with a friend is also available, but no level is structured specifically for two players. Both players, despite being different characters are identical in both control and move set.

Controlling Kirby or co-op partner Prince Fluff, works surprisingly well for a two button game. Double tapping in a direction transforms Kirby into a car allowing him to move faster than just walking, while holding the jump button in mid air turns you into a parachute to slowly glide down. Along these built in functions, there are also level specific transformations that generally fit with the theme of the world. The transformation is also the highlight of each unique world as the theme wasn’t just to provide the player with a new setting or scenery; it changed the way the player would reach the end of each level. And since these transformations are just pure fun to play, I would often look forward the bonus stages of each world, since the levels usually would reuse these theme specific variations of Kirby. Taking advantage of each world’s theme is what the game did remarkably well from start to finish; it’s just the lack of any punishment for missing a jump or getting hit by an enemy, shifts the experience to a mindless, carefree platformer.

When you land on a spike or are hit by the enemy, Kirby lets out a little scream and drops a sizeable amount of beads all around him. There is no health bar or lives to account for, and even if you are hit without any beads like Sonic and his coins, nothing happens. Falling into a hole or being crushed by a block, just results in more lost beads and a rescue from a bird to a previous, safer platform. Some type of health system like Mario Galaxy’s 3 hit health bar, or even the concept of the beads acting as your health like the Coins or Sonic, could have dramatically changed my experience with the game.

The sheer lack of any punishment (losing the worthless beads doesn’t count) doesn’t help defend Kirby’s stance on being a game for children, especially when the art direction and storytelling doesn’t reflect anything that can be remotely classified as a mature subject matter. This childish tone can be overlooked due to the amount of creativity each level has to offer, but Kirby’s Epic Yarn comes off, more frequently near the end, as a boring experience with nothing to gain skill wise or mentally. If you are one of those OCD type players who need to collect every single bead or piece of furniture, then you might get some enjoyment out of Kirby’s epic yarn, but it might be only a matter of time before the realization of how stupid furnishing your virtual Patch Land apartment will become clear. I often complain about the difficulty associated with 2D platformers and the constant repetition of the same level, but finding a balance between easy and difficult was what Kirby’s Epic Yarn failed to accomplish the entire game, therefore, ruining stylistic visuals used to create many memorable, creative ideas.