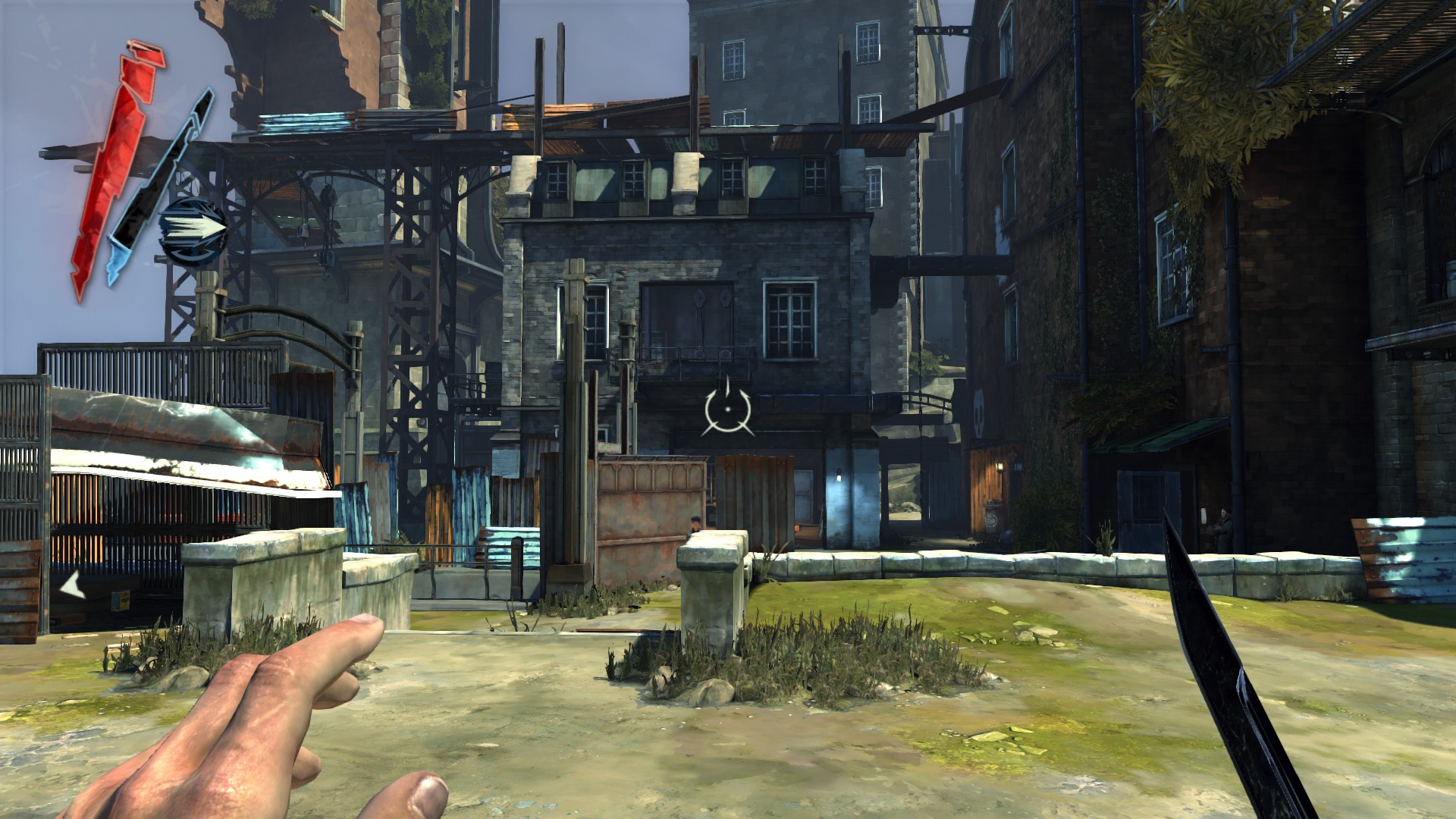 I don’t know if I actually enjoy stealth games. I find that whenever guards spot me trying to sneak from behind, I fall into an awkward limbo where I will either restart from my latest save, or stab everyone in the neck until I hear complete silence. Unfortunately, Dishonored doesn’t change my mostly cynical opinion about the stealth genre. Dishonored’s industrial, Victorian era setting fails to even compete with the highly detailed and futuristic world of Deus Ex, but it stays close to the crouch walking, throat stabbing and trap setting tactics found in the best stealth games.

Audiographs, books and journals help provide additional information to build upon Dishonored’s setting, but stopping to read while sneaking around really ruined the methodical pace. On PC, Dishonored looks technically impressive, but its slightly cartoonish art aesthetic with exaggerated human features, does not fit well with the serious subject matter the game explores.

Tasked with protecting the Royal Empress, her assassination (which unluckily frames you – Corvo – as the murdered) triggers your arrest and reveals the corruption within the Empire of Isles. This revenge plot does little when trying to deliver a meaningful story, except provide a justifiable reason for the assassination of certain people. Dishonored will give the player a choice to kill.  If you so choose, completing the game without ever killing anyone represents a viable approach.

If you want to deal with a guard or assassination target in a manner that best suits the situation, this adaptable approach comes with consequence. For every person killed, your Chaos builds. The level of Chaos ultimately affects the story’s ending, which the game explicitly says will either give you the “bad” or “good” ending. The moral choice, with options situated at completely opposite ends of the spectrum, can ruin the experience of Dishonored if taken too seriously.

With a forgettable story and abrupt endings, playing Dishonored with both a lethal and non-lethal approach, allowed me to just enjoy my time as Corvo. Moral choice did not fit well within the context of an assassin, but I do appreciate multiple ways to eliminate a target. I often took a lethal or non-lethal approach based on what seemed most challenging, not what would give me the better ending. Combining sleep darts, wire traps, and guns, proved as reliable tools when I failed to choke a guard to sleep – my favourite way to null a threat.

To most effectively use your items, you will also unlock supernatural powers. I mostly ignored majority of the powers as I struggled to find scenarios where using a power such as, spawning human devouring rats, proved to be most effective. I found myself using these powers mainly for very specific, and often infrequent, moments where their use became clear.

One supernatural power, Blink – a teleportation technique – I used majority of the game. To quickly situate myself behind a guard for a choke hold, I aimed the cursor directly behind him. To swiftly cross a courtyard, I Blinked onto window sills and street lamps. Blink’s versatility changed the way I approached each corridor of guards, or patrolled city streets. Blink enabled many of Dishonored’s best moments, often spent above ground on roof tops or cross beams.

While most games, like Dishonored , offer an environment to explore, they usually will only reward the player with ammunition. In Dishonored, Runes and Charms carefully hide in unvisited portions of a level, making your exploration worth the effort.

Charms act as minor augmentations to your characters. Runes unlock and upgrade supernatural powers like Blink. Without Runes, you can’t unlock additional powers and upgrades. And although I said I ignored most of the powers, experimenting with them and unlocking other passive abilities, should entice exploration. To aid in finding Runes and Charms in large industrial factories or neighbourhoods, The Heart (an actual beating heart you hold in your hand), when equipped, will direct you to where exactly Runes or Charms (often locked away in safes or hidden rooms) lie.

When the number of Charms and Runes accumulate, which leads to other abilities, Dishonored moves away from the limited, introductory levels. A masquerade party, one mission towards the end of the game, requires you to assassinate one of three sisters who are all dressed in the same outfit of different colours. Searching their house for clues and talking to other party attendees for ideas, made me wish Arkane Studios matched the masquerade party’s creativity throughout the entire game. I don’t intend to label the rest of the game as inferior; the masquerade party just sticks out as the moment where I knew Dishonored’s ideas became almost realized.

A problem with many games, not just within the stealth genre, involves enemy artificial intelligence. The importance of realism of the enemy A.I. can depend on the genre of game. Since stealth games rely hugely on observing guard patrols, obviously scripted A.I. controlled guards can take away from your satisfaction. I often never felt like I outsmarted guards, rather I just exploited predictable guard paths and extremely narrow and short lines of sight.

Dishonored’s unexpected emergence hints at the potential of Arkane Studios’ future work, all the while successfully iterating on already established stealth game conventions. The moral choice, inexpertly implemented, can, but shouldn’t, alter the way you sneak through each level, yet at least it provides the option between lethal and non-lethal approaches. Some of Dishonored’s problems lie within the game itself, but also the problems of the genre it chooses to build itself around. I don’t think Dishonored redefines or surpasses the highly regarded games of the baron stealth genre, but it will at least satisfy those who desire an experience of the same ilk of Deus Ex.