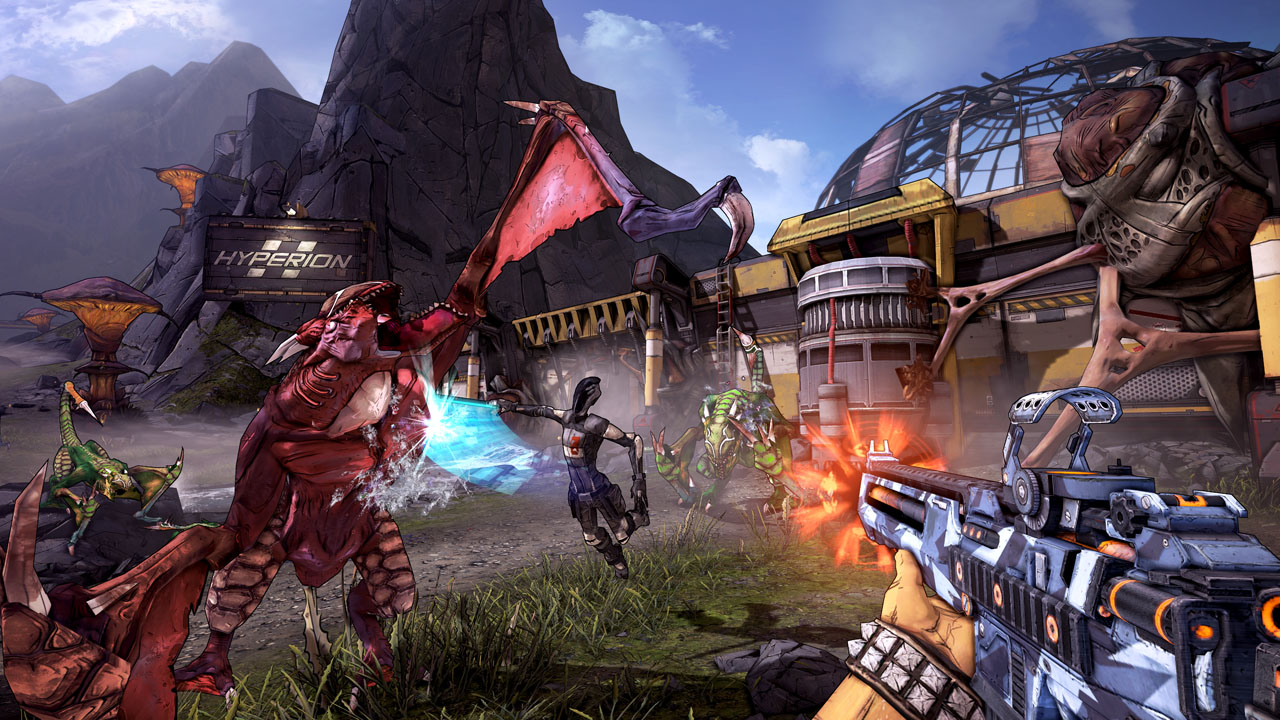 I believed if I collected enough junk shields and single shell shotguns that I eventually wouldn’t be so bored with Borderlands 2. Only about an hour in, scepticism to whether I would even finish, let alone begin a second playthrough, already began to develop. All the positive and glowing feedback said up until and after the release, made me question whether or not I failed to see the brilliance. But I know of that brilliance – I dumped over 50 hours into the first Borderlands and all of its DLC. After 25 levels as a Siren, the unsettling familiarity and the unsatisfying reward for the patience the progression requires ruined any desire to ever play more Borderlands

Returning to Pandora, this time as a different Vault Hunter, will reveal each citizens’ desperation for someone to prevent antagonist, Handsome Jack, from harvesting a powerful element called Iridium.

Borderlands 2 won’t provide a memorable plot, but the addition of a main antagonist quickly addresses the lack of one in the first Borderlands. Unfortunately, you never meet Handsome Jack until presumably the end of the game (I tried my best to finish the story, but failed). He will often contact you via your radio and spew some insults or humorous anecdotal stories, but nothing he says will rile you up enough to warrant killing him. Hating a villain you never met or even seen beyond the little photo in the corner of your screen, proves incredibly difficult.

Handsome Jack, and many other characters on Pandora, will also continue to deliver the humour and allure of this post apocalyptic world. Sometimes, jokes awkwardly land during conversations, slightly unravelling the believability of a character. Plenty of very specific references to other games, purposefully awkward dialogue exchanges and just plain weird mission objectives, make up for the failed attempts at humour. 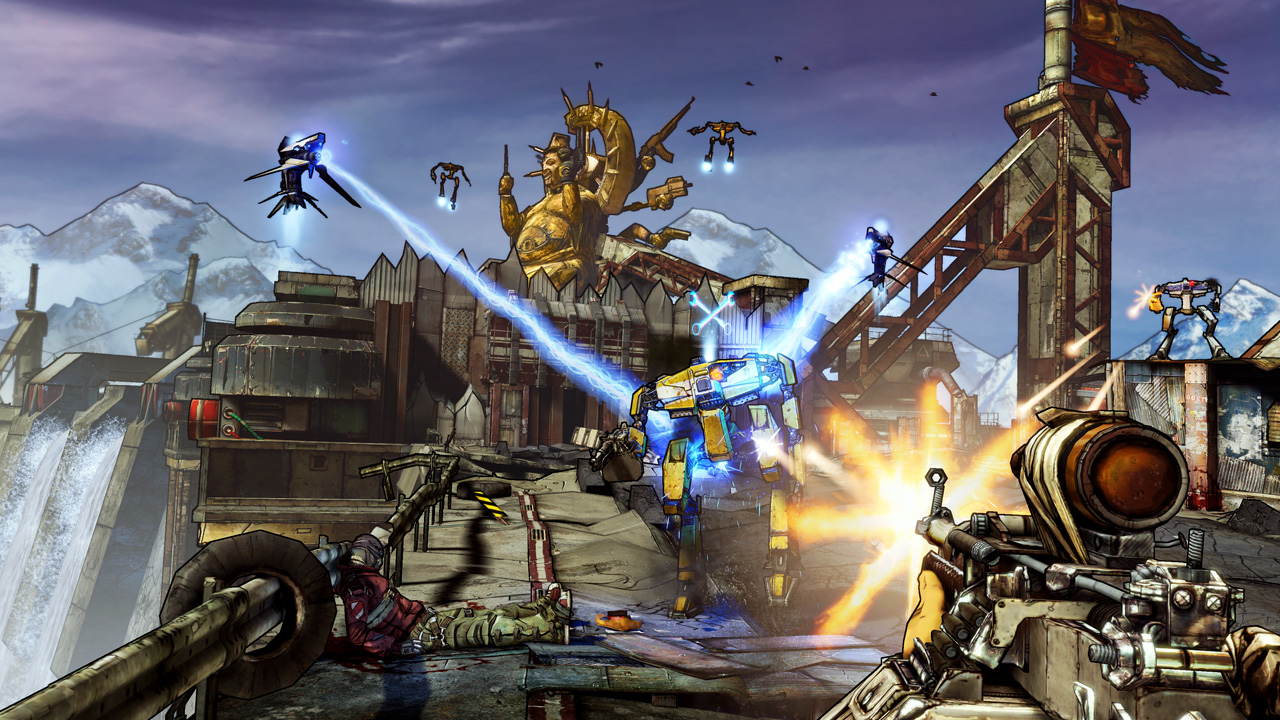 These awkward dialogue exchanges (often involving Claptrap) and the strangeness developed from living on Pandora, doesn’t fix the boredom induced from killing the often endless waves of similarly behaving enemies. Unlike the first Borderlands, enemies will actually try to avoid your bullets rather than running straight towards you. Skags will hop left to right, Psychos will tumble to the ground and Suicide Psychos will zig-zag towards you. At the start, I thought the improved behaviour of the enemy artificial intelligence would significantly increase the enjoyment of gun fights, but not much changed.

An emphasis on using elemental weapons such as; fire weapons on for flesh enemies and corrosive weapons for robots, encouraged a combination of different gun types. Yet even with a new emphasis on elemental weapons and improved A.I, the numerous and identical enemies each mission wants you to kill, quickly begins to feel like a chore.

Even with a wider variety of guns (so wide that I rarely see same weapons), the terrible chances of finding or receiving something useful, requires a level of patience that never matches the reward. I spent majority of my time with the same grenade mod and shield I found during the start of the game. While the end goal involves finding the best equipment, picking up a dozen always inferior shields just to sell them, eliminates the entire appeal of a loot driven game – the excitement of finding better items.

The character progression also requires a large amount of patience not worth the reward. The single upgrade point awarded to you produces little change to the way you play, if at all. With my Siren, I changed skill builds looking for something where I could see the results of my progression. Skills such as Kinetic Reflection, which enabled bullets to bounce off my character after I killed an enemy, became hardly noticeable as I fought. 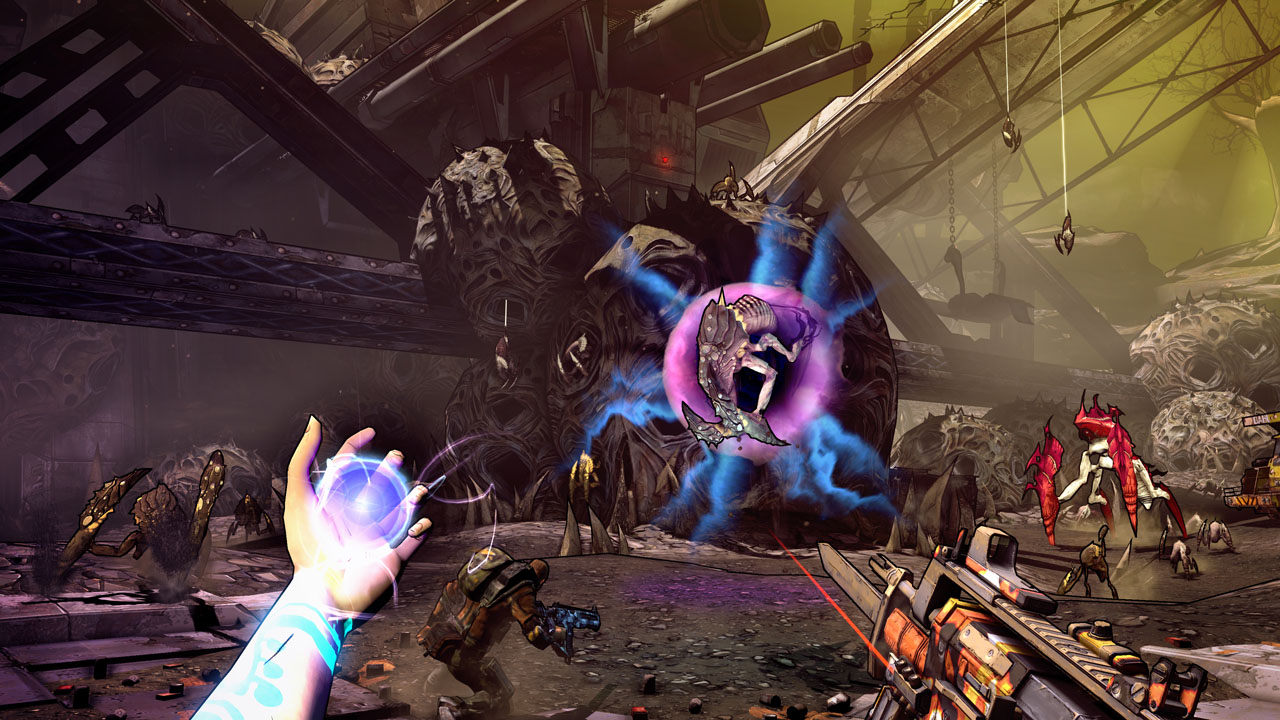 I later reset my points and invested them into the Cataclysm tree – an elemental focused path. But the rarity of even decent elemental weapons discouraged any path down the Cataclysm tree early on. Even towards the end, elemental weapons (besides pistols) dropped too infrequently. Outside of damage bonuses or slight variations in my main Phaselock ability – a vortex that sucks in and traps nearby enemies – the way I played my character only slightly changed. The Cataclysm skill tree best showed the progress of my character, but that still didn’t suffice.

A universal complaint about the first Borderlands circled the issue of quest variety. Each quest’s structure involved either killing something or collecting something. Nothing changed two years later. Borderlands 2 relies on the same mission objectives that turn tedious a lot quicker the second time around. I tried my best to ignore the repetition of each mission, but the tedium surrounding majority of the experience became too overwhelming to ignore.

If you think you can tolerate another few dozen hours of the same Borderlands from years ago, then Borderlands 2 might deserve a chance. While minor improvements addressed some issues, the overall game remained unchanged. To expect a better experience from a sequel, in my eyes, doesn’t seem like a completely unrealistic expectation. To say that familiarity encompasses the main issue of Borderlands 2 irks of peculiarity, but not dishonesty.