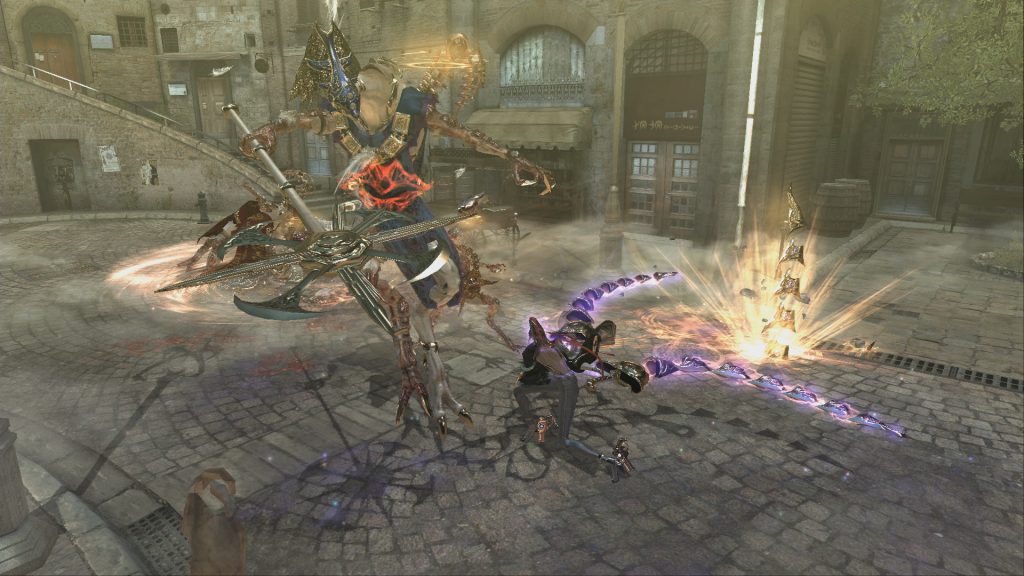 A giant monster stands in front of you, ready to pounce from its hind legs. When it strikes forward, you dodge in time and hack at it. Green goop spits from its wounds, but then it changes. It hunches down further and attacks you from a different stance. Now you can’t tell if you deal damage. You aim for different spots and try different weapons. Turns out your attacks did work, it just didn’t feel like it.

That moment of uncertainty occurs because of the system used for reactive feedback. When we play games, we expect a response for our actions. When our actions lack a response, the player disconnects from the game.

Reactive feedback fills the space between player action and game action. The most effective feedback combines both visual and sound cues, yet games fail to use even one. I wanted to look at the different genres and methods for designing reactive feedback.

PlatinumGames built on its pedigree of action games for over a decade. Their experience in the genre assembled a varied portfolio of games all dependent on feel. The often praised, intangible feeling ties to their understanding of reactive feedback.

The Bayonetta series best illustrates effective reactive feedback in its melee combat. The combination of sound and visual cues shows when your weapons and attacks deal damage. When you attack enemies, bloods squirts, armour detaches and flesh rips. In the image below, the point of impact shows the enemy flinching with blood around. 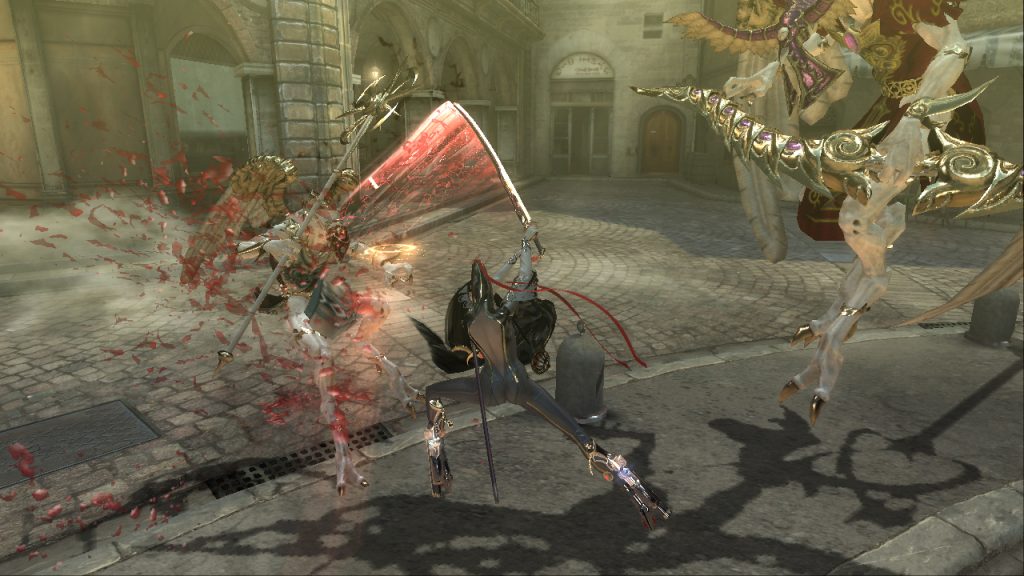 A satisfying crunch confirms landed hits, and all the visual cues reaffirm those actions. If the enemy blocks, a hollow thud rings and your weapon bounces back. Reactive feedback works for both landed and blocked attacks.

Sound and visual cues shouldn’t stop at the point of impact, but instead continue into enemy state. Injured enemies fall, limp and stumble with strong attacks or low vitality. The Elder Scrolls: Skyrim underutilized enemy state in combat. Enemies rarely flinched when hit. Skyrim’s melee combat felt and sounded like swinging a dull sword at a tree trunk.

Enemy reaction and sensory cues during combat contributes to the formula responsible for great feeling games. The attributes for effective reactive feedback extends to other genres with simpler approaches.

In Quake multiplayer, a tonk sound confirms a landed shot. Other games, like Killzone 2, used a high pitch chirp. If chosen right, players loved hearing those sounds during a firefight. Call of Duty also adopted these auditory cues, but supplemented it with visual “hitmarkers.” When a player lands a shot, hitmarkers – little ticks around the crosshair – appear with a noticeable crunch noise.

Hitmarkers found their way into dozens of games after Call of Duty 4: Modern Warfare. Instead of making characters flinch or spew blood, hitmarkers served the same purpose. 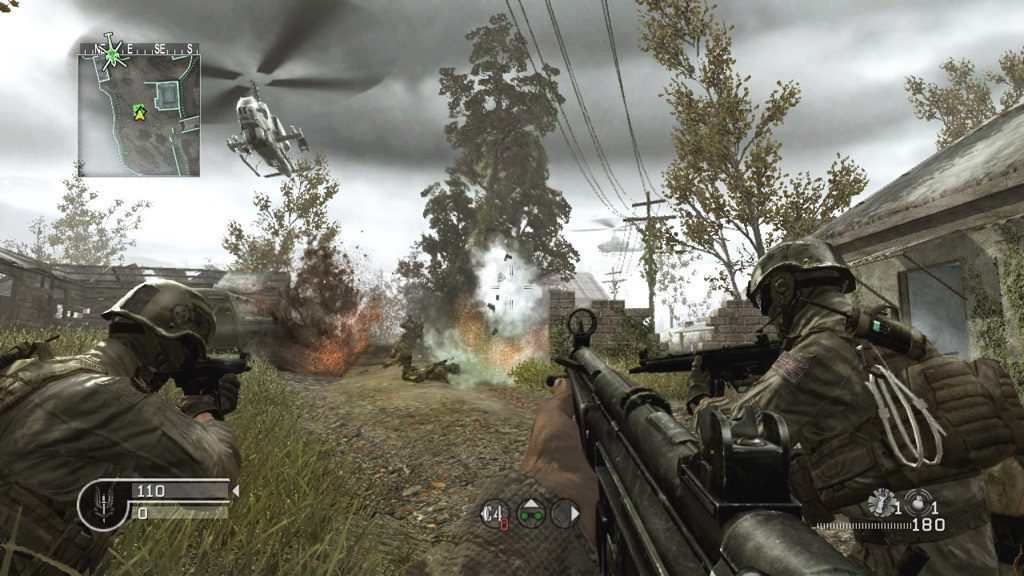 Health bars above enemy heads, like hitmarkers, relay information in a boring form. With hitmarkers, we look at the little ticks, not at the character model. With health bars, we stare and watch the health wind down. To track the enemy, we use our peripheral vision. The replacement for cues like blood and flinching contributes less to the sensory experience, which doesn’t improve overall feel.

Visual and Sound Cues in Shooters

Bungie’s Halo best combine visual and audio cues for reactive feedback. All enemy types emit unique sounds when killed and display distinct visuals when shot. For a decade, the Halo franchise used these cues instead of hitmarkers.

When you shoot a grunt in the head, they collapse and their head pops. When you shoot a spartan, their shields sparkle, pop and then bleed when you shoot armour. When you shoot a hunter, they bleed orange and let out a huge groan when defeated. It’s a difficult sensation to put into words, but your bullets feel powerful. Halo’s reactive feedback propelled the series for a decade.

After Bungie left the Halo franchise behind, 343 Industries struggled to recreate that Halo feeling. However, the multiplayer’s reactive feedback works as well, if not better, than previous installments. Spartan shields sparkle, heads pop and blood splatters all the while hitmarkers confirm the landed shot. Halo 5: Guardian’s multiplayer, for all its flaws, understands the sensory experience of reactive feedback.

The 343 campaigns struggle to achieve consistent reactive feedback with the introduction of the Promethean enemies. The Prometheans are covered in metal armour from head to toe. When you shoot them, you don’t see or hear much, as if your bullets glance off their armour. After enough bullets, armour plates or limbs fall off, but it creates an uneven shooting feeling. 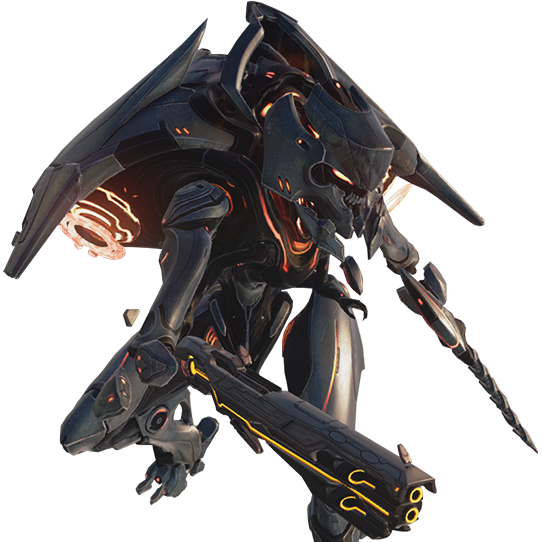 In the image above, you first shoot the orange balls above its shoulders. With every landed shot, orange spits out. After enough damage to the ball, the arm falls off. When it loses both arms, you shot the head for more orange sparks. The Promethean Knight provides a consistent reactive feedback throughout the entire interaction. This feedback design does not extend to all enemy types, so the difference is jarring.

Games depend on our senses, which reactive feedback feeds. If games fail to fill the gap between player action and game reaction, the interaction feels empty. The sensory experience expands beyond graphics and music – it extends to the player choice and game systems. Well designed reactive feedback ensures a direct response for every player action.