At this point, I expect disappointment. Despite showing great potential with their excellent game development, Sony continues to produce expensive, unwanted or unnecessary gaming hardware. With Wednesday’s event in New York, the reveal of the PlayStation 4 (or whatever Sony decides to call it) will determine whether or not Sony finally realizes the great position the company sits in. Microsoft’s lack of software development and Nintendo’s painfully slow sales of the Wii U, puts the Playstation 4 in a position to reclaim the dominance of a decade ago.

But unfortunately, I instil little faith in Sony to provide any innovation or perfection. Destructoid.com recently shared a photo of an alleged PlayStation 4 controller. The photo indicates a built in, lit, motion sensor bar, small touch screen or display and, improvements to the analog sticks and directional pad.

When considering Sony’s track record with leaks around items like the PSP Go, PS Vita and new PS3 models, one can safely assume the legitimacy of the alleged prototype controller.

What does this controller mean if real? It means Sony once again tried to respond to its direct competitors, rather than innovate and grow in a direction that best represents the Playstation brand.

The improvements from the PS1 to PS2 represent the leap in graphical technology. The jump from the PS2 to PS3 represents the jump into the HD era. With every new console, people could easily notice the drastic improvements between them. With the improvements in graphical technology coming more from the technical side of things, no one (unless informed on the subject) will notice the higher frame rates, smoother performance and small details that the new consoles will provide.

Looking back at the PS3 launch, Sony does not want to present itself as the most expensive console of the market. So in order to deliver areasonably priced console, the overall graphical performance will suffer. Noticeable improvements will come from development studios that, once they become comfortable with the hardware, will learn to best optimize their game engines around existing consoles. 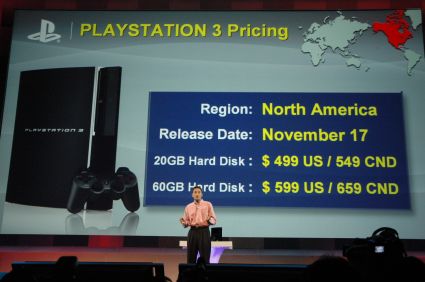 So in order to excite players with something more noticeable than 60 frames per second, a controller redesign remains the obvious choice. Many people find no issue with the current design; neither do I. While I appreciate traditional means of control, I do want innovation. The Wii U controller and its large capacitive touch screen seemed unnecessary at first. Games like New Super Mario Bros. U failed to show the need for the touch screen, but ZombiU’s inventory management, map display and weapon selection, helped me to understand the vision Nintendo tried to explain.

Some things however, don’t need proving. The PlayStation Move’s failure exists as discernable evidence of the undesirability of motion controlled games. Like the rear touch surface and touch screen of the Vita, these unwanted additions to the new Playstation controllers will drive up the cost of production, then driving up the price when sold in retail stores.

I don’t think many people will object to innovation, but I’d rather see Sony put the money into services like PlayStation Plus and offer new incentives for the subscription. Why not innovate in the software and the services the new PlayStation can provide? Instead of introducing gimmicky additions, improved multiplayer interface and media functions would ensure useful, and appreciated, features of the console. To avoid the inevitable dropping of features like Nintendo with the 3D effect on the 3DS, Sony should avoid gimmicks and develop towards things that people constantly ask for.

Wednesday’s Sony event, while exciting to see, forces me to temper my expectations. With the Vita, PSP Go and PlayStation Move, Sony again and again showed that they didn’t learn anything from their previous failures. I don’t expect the next Playstation to drastically change the way people play games, yet I at least expect them to focus on what they know best; making video games.