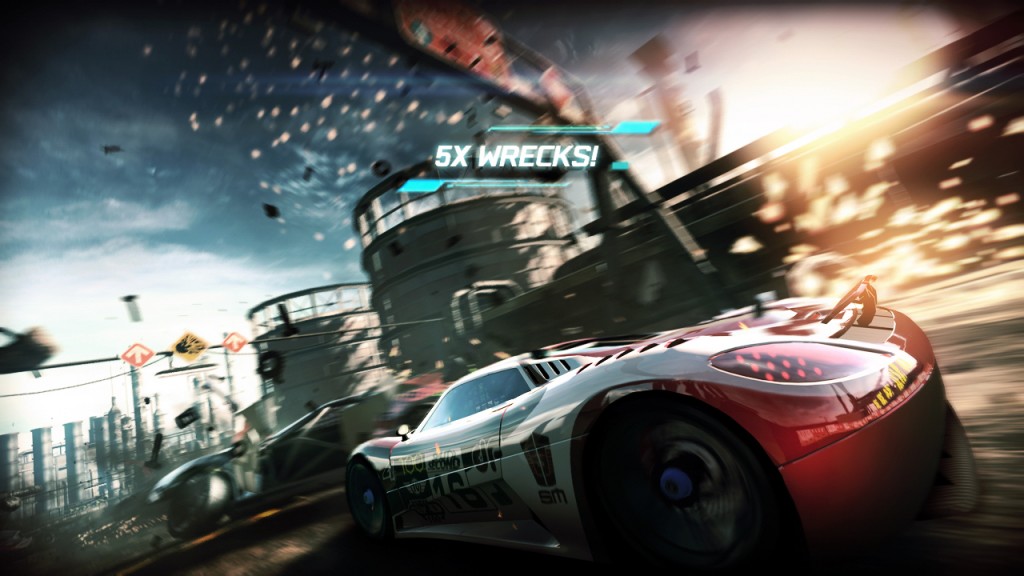 I haven’t written something in a while, probably because I was slacking, but let’s shift blame towards a lot of writing assignments in school. In my free time I am continuing to play some games, most notably Fallout 3 and Split/Second. There is a feature I want to write relating to Fallout 3, which just happens to be one of the assignments I’m planning to hand in as the due date approaches. Since I’ve finished Fallout 3, I’ve been playing Split/Second, a game part of a genre I usually pay very little attention to. There was a multiplayer demo released a few months back, and I remembered how much I enjoyed it which leads to my purchase of it during a 15% off sale at Best Buy.

Racing simulators like Gran Turismo and Forza interest me, but from experience I have recognized that I also find them rather boring to play.  Split/Second sits at the complete opposite side of the spectrum, and provides a racing experiencing that’s plainly about racing, not tuning my car to reach the best performance. I understand that car enthusiasts really appreciate being able to tweak every aspect of their car, and I don’t think that developers should only focus on arcade racers.

The characteristics about Split/Second that made me even consider buying it was its crazy explosions, and relatively easy controls. It’s always a fight with the controller when playing Forza, because turns require patience which doesn’t mix well with the anxiety built up from not obtaining the lead early on. I always find myself rushing to pass the cars, nudging the bumpers of opponents, acts of desperation to get to the number 1 spot. In Split/Second, I don’t worry very much since I know someone right behind him is filling up his power metre, so they can drop a bridge on the leader’s car. If I can’t pass opponents because they are better drivers or have faster cars, I can rely on my power metre to send an exploded taxi car rolling across the raceway.

Now that doesn’t mean Split/Second is all luck and even the worst driver can be in first, you also have to be quick about dodging the obstacles and pull off clean effective drifts. They present the races in seasons, since the story revolves around the concept of a T.V. show. There are some events I’m not particularly fond of, such as one event that requires you to dodge airstrike missiles from a helicopter. I don’t buy or even play racers often, and I hope Split/Second will introduce me into a genre full of equally exciting games.