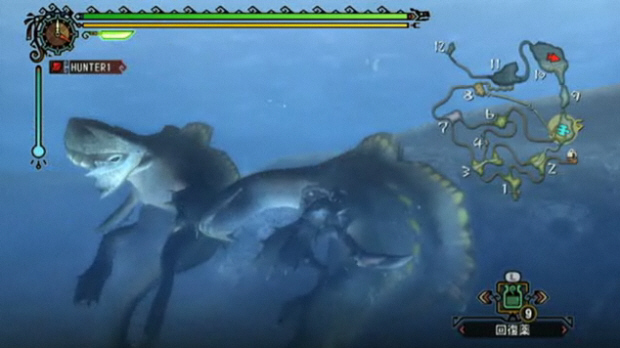 I never intended to pick up Monster Hunter Tri, but with the name being brought up throughout the week at odd places and my huge curiosity for why Japan loves this game, I figured I should take the chance and see what the big deal was.

With no interest at all in the single player, I jumped into the multiplayer with a buddy to slay some monsters. Right away I realized that I had no idea what I was doing and regret not going through the single player. With expectations low, I figured I should play it for a bit just to get myself familiar with the surroundings, and understand how the combat worked.

With no lock on system to be found, it was somewhat difficult but not frustrating to take down some dinosaurs. Surprisingly enough, there is an addictive quality to accepting quests, then going out and try to complete the straight forward tasks.

The same formula seems to carry over in the multiplayer, where you could party up with 3 other hunters to complete quests. There is an acceptable amount of variety to choose from, that range from collecting some mushrooms to slaying a huge dragon. I have to give credit to Capcom for making the online feel like something that was important to them, not something they could slap together because of the casual Wii audience.

The online features full keyboard support, Wii speak compatibility and a list of quite populated servers.  There is a lot of content to dig your teeth into, but I have not played enough to see if it becomes harder, or more frustrating.