When the Just Cause 2 demo was first released, my friends were making a huge deal out of the fact that you could grapple a person to a gas tank, which would rocket into the sky with the person dangling helplessly behind. While I did replicate this a few times already, I prefer stealing jets and firing my rockets at anything with a red explosive warning label covering the object. While I did complete a large portion of the structured story missions, a lot of jets were stolen in the process. With each fancier, bigger and faster jet that I find, I am slowly becoming desperate; looking for what else Just Cause 2 offers that is even remotely interesting.

Most games eventually lose their grip on me, varying in intensity depending on the type of game. What keeps this interest strong is an addictive repeatable action or system, such as the loot drops in Diablo; or a large variety of different activities throughout the experience. There are other factors to consider such as the story and the manufactured world the game lives in, but Just Cause 2 barely has any of these.

The missions lack in variety, combat doesn’t evolve from the start of the game and the story on this fictional island of Panau never gets as ridiculous as I want it to. There are awesome things like being able to grapple from car to car then hang over the sides,using the car for cover in driving shoot outs, but all of its tricks are exhausted within the first few hours. Its tricks, as entertaining as they are, never evolve beyond their initial reveal, so my excitement never reaches new levels.

Just when I’m about to give up on the game entirely as I scramble back hoping it can capture me, it presents me with something interesting such as undead Japanese World War II soldiers. I was eager when my drug smuggling partner spoke of the undead problem along the way of the carefully chosen drug trail, though my eagerness was unwarranted. When I finally met the Japanese Soldiers, there was no immediate difference in appearance or action; they even wielded the same modern guns I was using. It was a half executed idea with great intentions. As I stated before (using this particular instance as an example), Just Cause 2 never gets as wild and insane as I want it to. The ideas are there and the intentions are clear, however they are not capitalized on. 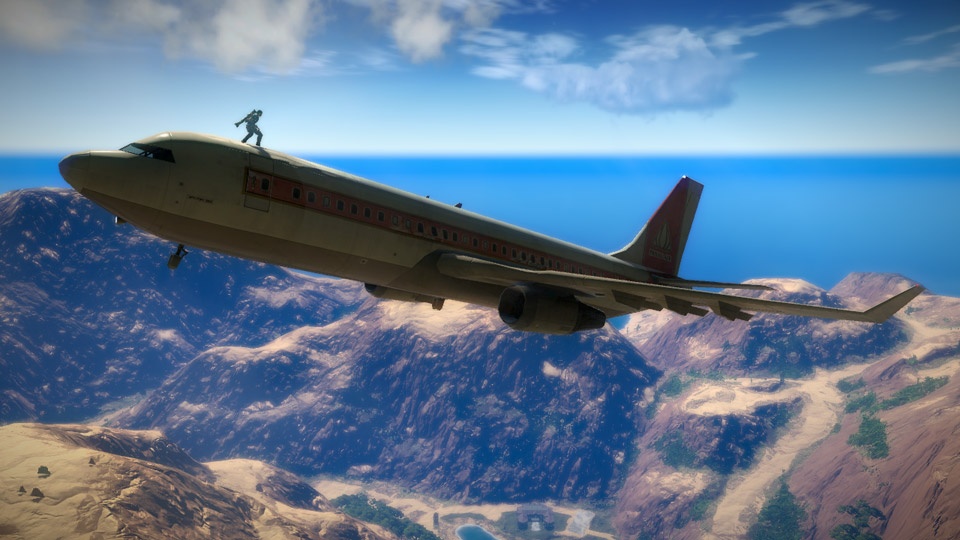 I think the ridiculous game I imagine while playing Just Cause 2 is Saints Row: The Third. Based on what I have heard, the game constantly goes beyond the spectrum of reality and executes on those ideas effectively. It’s awesome that you can fly a jet or a commercial airliner to the highest point in the sky, exit the cockpit then stand on top of the plane, but when I get to that point I often think, “Well, now what?” That’s where these half baked ideas are glaring, as there is nothing in the missions that uniquely uses the ability to stand on the plane while it climbs.

I’ve mentioned jets, planes and airliners often throughout this write up as that is the primary way of transportation on the island. The Island of Panau is huge, landscapes varying from enormously tall mountains or flat, densely populated jungles. To my surprise, the environments are very detailed in Just Cause 2, though you wouldn’t know that unless you spend time on the ground. Since most of your time is spent in planes, helicopters or even gliding in your parachute, all you will mostly see is the top of buildings, trees and snow covered mountains. For when you are on the ground for the far to frequent mowing down of unintelligent enemies, you are always in some gray, industrial area, blowing up every gas tank you see. The calm cities to the small villages are never explored in the missions of the game, forcing you to venture on your own to see the intricacies or subtleties of the environments.

If it were not for my Playstation Plus subscription, I would never have given Just Cause 2 an opportunity to prove itself. Unfortunately, even when given the opportunity, I am left soured at wasted potential. There are times where I see what the game is aiming for, but then it pushes me back into an industrial power plant. Unless you are a player who can make their own fun as such in games like Minecraft, there is not much to be had in Just Cause 2. I prefer structure no matter if the game is open-world or linear. In Sandbox games I’ll often veer from the structure to play with the toys the game has to offer me, but when both are so similar, I am left wanting something greater.