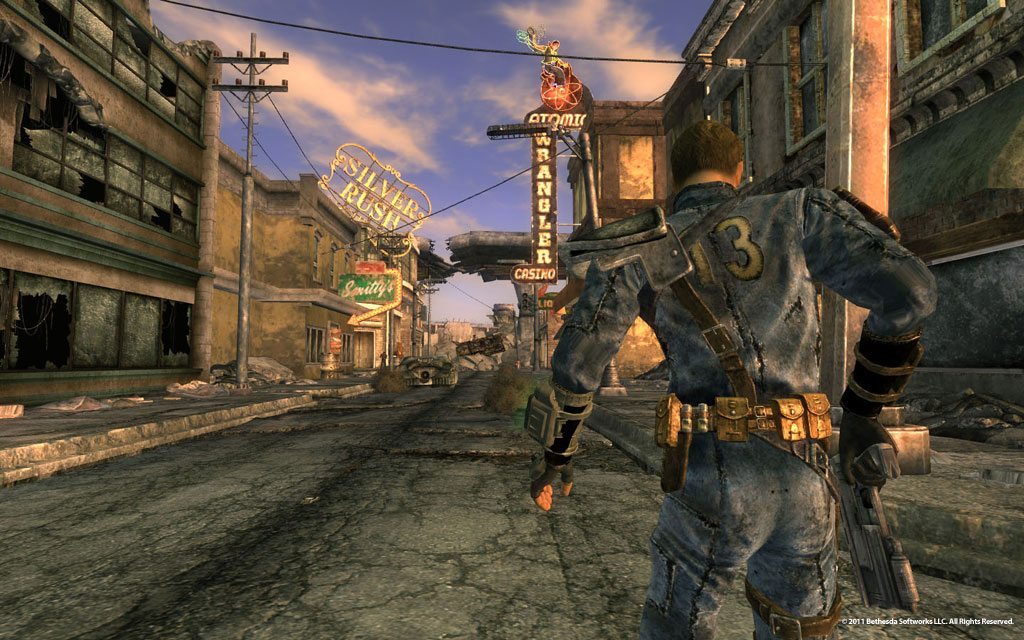 If I was going to play Fallout: New Vegas, I was going to have to do it now. When speaking of just overall performance and graphical output, Skyrim – a game I have yet to play – is far superior to the brown, buggy and sluggish performance of both Fallout 3 and Fallout: New Vegas. I imagine the transition from Skyrim to New Vegas being the equivalent of sleeping on a mattress, to sleeping a solid wood floor.

While being completely aware of the situation, I somewhat forcefully adventured, again, through the post apocalyptic wastelands of the Fallout universe.  Although I thoroughly enjoyed exploring the wasteland the first time around, the reality of the Vaults and the desolation between cities has settled in firmly, leaving me comfortable with my surroundings, not foreign like in Fallout 3. My curiosity still overpowers me when passing by an unexplored, vacant neighborhood of houses. The idea of what treasures could be hidden away is more than enough incentive to steer me away from my main goal.

Though I didn’t always have the desire to explore, it was something that eventually accumulated naturally. Fallout: New Vegas is excruciatingly boring to start, and is not quickly remedied by an exciting event or plot line, it’s a gradual process. This process simply entails you lowering your expectations, accepting that your character is about as useful as a handful of dirt. All your weapons are garbage, the weapons you steal from everyone else is garbage, which means you have to suffer through the most uninteresting missions until you come across something worthwhile exploring, which in my case, was an abandoned, highly radiated Vault I was ill prepared for. This vault sucked a lot of hours away from the actual progressing of the story, but after I cleared out their armory and filled my wallet will bottle caps, I was able to hold my own against raiders and mutated animals.

There were numerous accounts of me just turning off my system, ready to just give up on New Vegas and just suck up the measly $10 that I spent on it. My time is worth more than suffering for 10 hours for something that I spent $10 on, and could easily find something better to fill the time. Of course, my stubbornness and refusal to let the game win resulted in my commitment to see the infamously terrible ending of a Bethesda game. So after about 30 hours of brown deserts and characters awkwardly staring into my soul, I can confidently say I will get through the entirety of Fallout: New Vegas, even though the combat is nothing but terrible and bothersome, and the story vaguely interesting.

As much as I hate shooting anything in Fallout: New Vegas, I continue to play because of the option to complete missions just through persuasion and dialog. Sure the persuasion I speak of is solely reliant on how many skill points I have allocated into my Speech skill, but I’d rather talk my way out of a problem then have to aim down my sights, or use the V.A.T.S system which for some strange reason, has trouble recognizing that I’m trying to target the head, like every other time I use the stupid system. I don’t understand why I would even bother shooting the wings of a flying insect or legs of a Ghoul, when I can just shoot it in the face and kill it faster.

There was one mission, specifically the one that takes place in the Ultra Luxe Casino that ruined the rest of the game for me, but it a good way. The casino wasn’t filled weapon wielding maniacs trying to kill me the entire time, it was a mission of smarts and investigation of what was truly going behind the curtain of your first impressions. It was this mission that showed me that Bethesda, and maybe a couple of other developers, could only execute on their ideas so effectively. It showed that we could interact with the game world beyond shooting people in the face or slicing something in half. Describing this mission is difficult without going into specifics, so I’ll just say that it ruined the rest of New Vegas for me, because I knew the rest would consist of the things that I hated about Fallout which is killing and looting enemies, not the exploration and adventure I got to experience in the two hours in the Casino.

New Vegas, or any Bethesda game for the matter, is full of content. Despite being at the 30hour mark, I have plenty still unfinished waiting for me, waiting to suck more time out of my life. I’d hate to quit now, I’m in deep, in for the long haul. That’s the thing about Bethesda games, you have to commit going into that unknown cave or Vault otherwise, you would just waste your time if you turned back. I am committed to New Vegas, even with its frequent and plentiful bugs and glitches, I will see the ending, unless it glitches, then I’m out of options.