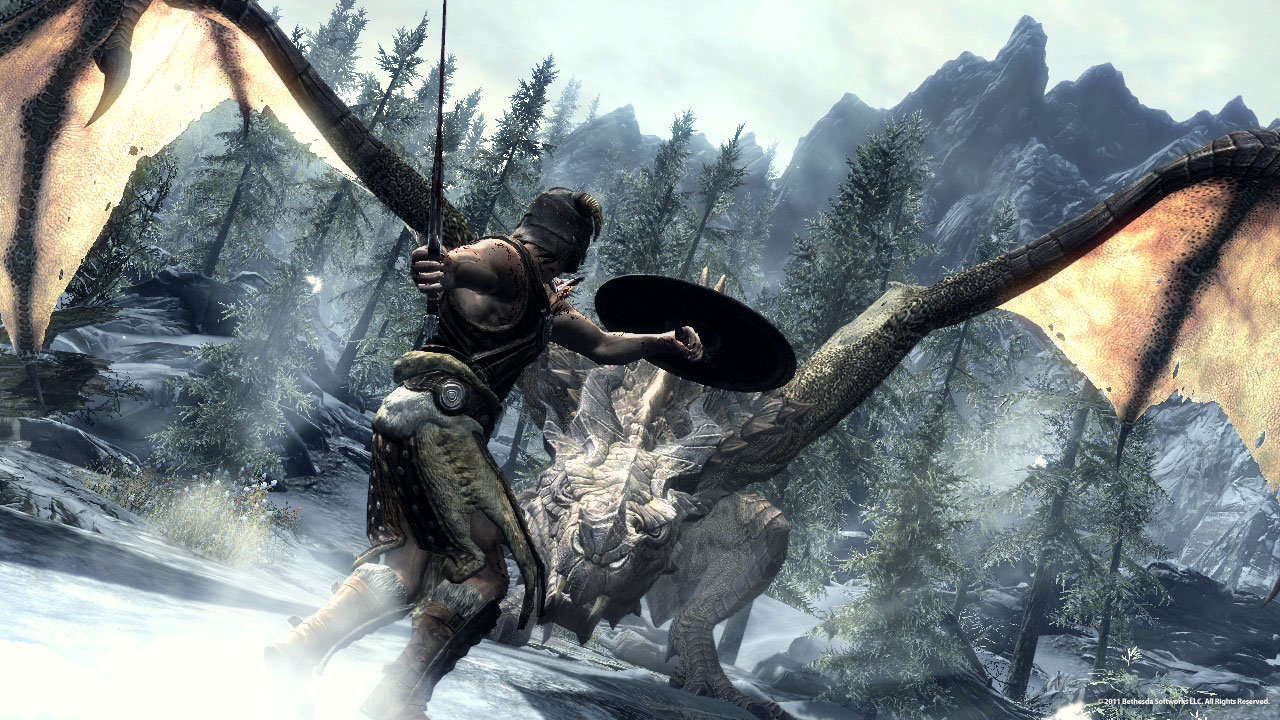 I was sitting in my Monday morning 10:30 lecture, wondering why I even bothered to show up when the professor just reads off the lecture notes she posts online anyways. So to distract myself from looking at my watch every 10 seconds, I looked around the room out of curiosity. And of course, to the left of me about 5 rows down, this guy was playing Skyrim on his laptop, shooting arrows at armored covered skeletons he encountered while exploring a cave or ruin. Then I began to think, is Skyrim really that good? Am I making a huge mistake by not jumping at the chance to explore the mountainous terrain of Skyrim? These last few days as I play Zelda: Skyward Sword,the probability of that mistake is falling more and more in favor of Skyrim.

But I haven’t chosen to separate myself from the game because I want to be different, this decision roots back to my unpleasant experience with The Elder Scrolls Four: Oblivion. Forced to play it on Xbox because of my ancient PC, I had to deal with utterly unplayable frame rates, clumsy navigation through menus and excessively long load times. But I tried to push those problems aside and just enjoy what the game had to offer. There had to be a reason people played it for hundreds of hours and enjoyed every moment. And this notion of dedicating a large portion of your life to a game and its world meant something to me, and became my motivation to keep going.

Though, the major difference was that they played it back in 2006, when no one really was bothered by the muddy textures, floaty melee combat and overall slow performance. I tried to play it around games like Fallout 3, Mass Effect and Dragon Age, all examples of major improvements in game design in almost every aspect. After about the 13 hour mark in Oblivion, I just gave up. I was riding my horse through the forest at what seemed like 10 frames per second, chugging along, and running into load screens as the textures were popping up, when I finally just saw no value in forcing myself to enjoy something that didn’t age well.

As I play through Zelda and look at Batman Arkham City still shrink wrapped on my shelf, I can see the worth in playing ageless games like them, and no worth in something so dependent on its era in order to impress. Over a decade after its release, you can still play Ocarina of Time and still be amazed by its complexity and scope, but a game like Oblivion, a predecessor to Skyrim, is unplayable only a few years later.

Though unlike Oblivion, I have the opportunity to play around release, and I question whether if I should just forget about every other game and just play Skyrim. Even some of my friends who are heavily involved in every Call of Duty, have barely touched their copy of Modern Warfare 3 because of Skyrim. This game has reached levels of success that I, nor the developers, would have ever imagined.

Even recently at the Spike Video Game Awards, Skyrim received the Game of the Year award that I think every person at home and in the audience was expecting. I wasn’t at all surprised; it received critical acclaim and sold millions of copies. But even when Skyrim has the most blatantly obvious indications of a game that everyone must play, I still cannot bring myself to fully commit.

During my Christmas break I plan on writing a lot more now that I have the time, and playing through the big titles that I have missed since the summer. I have a number of titles waiting to be finished, though I’m not sure which one after Zelda. I had thoughts of disregarding what I already own and buying Skyrim, though that might only happen through an impulse reaction. And based on my previous purchases without thinking like Dirt 3 or Super Meat Boy, I always experience buyer’s remorse.