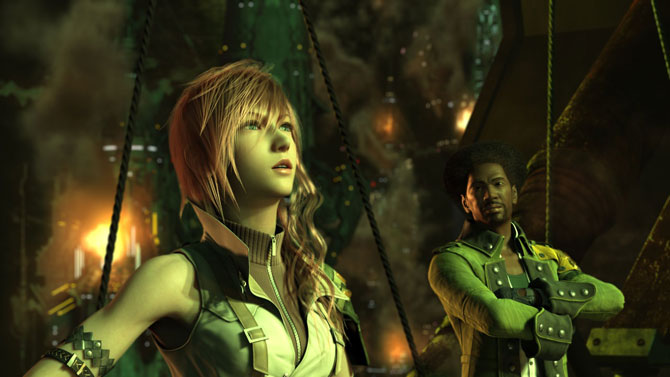 I haven’t played many Japanese RPG’s, so it has been a genre that I have been interested in but never knew where to start. After finally getting my feet wet in games like Last Remnant, Demon’s Souls, Eternal Sonata and Final Fantasy XIII (which is what I’m currently playing), I have created a general description for my experiences with these games.

For example: Eternal Sonata was cool, but the extremely cheesy voice acting and lack of challenge really ruined my experience.

Of course I haven’t played nearly enough JRPGs to make that general description legitimate, but so far that is what I’m constantly running into with this genre. While my selection of JRPGs is all over the place in terms of quality, I still haven’t found one that grabs me from the very beginning.

After I complete Final Fantasy XIII, it’s quite unclear which game I will try next, even though I have had many games suggested to me. One game that seems logical to play in the JRPG genre is Final Fantasy VII. This PS1 games seems to be the favourite amongst Final Fantasy fans, but the bad blocky early 3D graphics on PS1 is an eye strain.

There are a few games on PS2 that interest me such as Persona 4, Final Fantasy X and XII, but since I was a Nintendo enthusiast in my childhood, I thought that buying a Gamecube over a PS2 was the correct decision. Since the only platform to play these games is PS2, I have disappointingly put those games on hold until I buy a PS2, or wait until Sony puts PS2 games on PSN.

Since I have been spoiled with this generations eye candy, I think the best thing to do is to stick to something modern, until I build an appreciation for the genre. As for what game I’m going to tackle next, I’m not quite sure, but I am sure that I don’t want to play one with extremely cheesy voice overs.