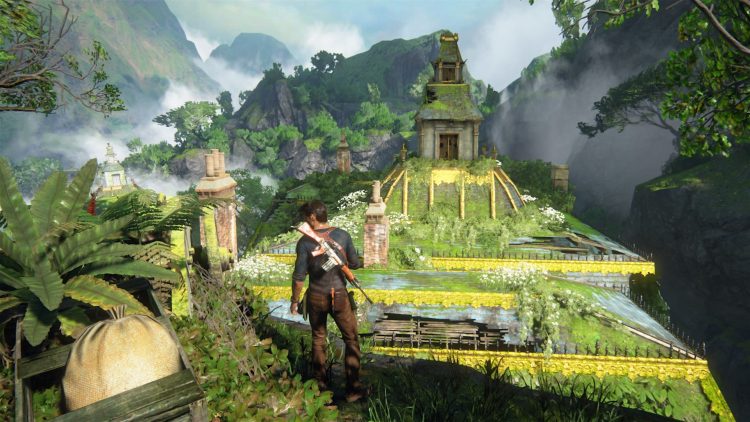 In Uncharted 4: A Thief’s End, I barrel down empty corridors, glancing at the ruins of ancient tombs and cities. These decorated hallways and detailed rooms disappear in a blink, but they connect me to the next section. Artists spent countless hours creating simple objects like doors, vases and carpets for these areas, yet it takes a second to run past.

To bring purpose to the connecting areas, developers try and slow players by littering collectibles throughout. The loot hunt might encourage exploration, but environment appearance still contributes little to the overall experience. While the patterns of carpets can match the embroidery of the curtains, these details change nothing about how Uncharted 4 plays or feels. As budgets increase alongside visual fidelity, prettier, empty connecting areas won’t stop players from pushing forward.

Uncharted 4’s uneventful, but beautiful walking sections try to contextualize the new area through the environment. The game limits movement to a slow jog, which extends the time it takes to find something like dinged-up army helmet or tarp covered library. These optional collectibles and detailed rooms tell their own stories, but it won’t affect how you play. If players choose to ignore the deliberate pace of the slow jog, they can progress to the next section without repercussions. No matter how detailed the engravings in door panels look, nothing about it really matters. The time and effort spent on visuals often goes unnoticed

Audio logs or consumable loots can also fill empty, connecting areas, but that too feels more like busy work. BioShock’s resource economy depends on scrounging for items. Unlike Uncharted’s optional items, the drinks, food and ammo found in the dank corners in the City of Rapture, assist with gameplay. While I don’t love spending large chunks of games looking at the floor for loot, it at least interacts with a game’s systems.

Instead of more environment detail in the connecting areas, or removing them altogether, developers should aim for interactivity. To maintain continuity from section to section, a long, quiet hallway between action gives players a needed break. Uncharted 4 already breaks up action with platforming and puzzles sections, but a simpler objective still repays the player. When you bypass a locked door, the feeling of interaction rewards more than details of paintings or bed spreads.

One area in Uncharted 4 sent you through a large, abandoned mansion. I fought through dozens of goons to reach the mansion, and after I wandered inside, I looked at walls, holding my left stick forward. Naughty Dog’s game worlds look alive through the smallest of details, but they also feel as like museums. We can look at the beauty around, but we can’t touch or do anything with what see.

Uncharted’s platforming sections nears that goal of giving players simple objectives inside a detailed, clam environment. During a flashback sequence, Nathan breaks into a home as he looks for a document related to his parents. To enter a locked door inside the home, you must climb up through the vents to unlock the other side. To reach the vent, wall mounted guns decorated around the neighbouring room leads to a small ledge to climb up.The sequence uses the enviornment for play, and not for decoration.

The act of unlocking a door gives players an objective to complete. And the use of the environment to progress gives players a reason to look around. If we scan the walls and scenery for the visual sensation, then we forego the interactivity. The touch is what makes game such a different medium. Developers continue to dump millions of dollars for improving the smallest visual details, but few people will notice, and fewer will care.