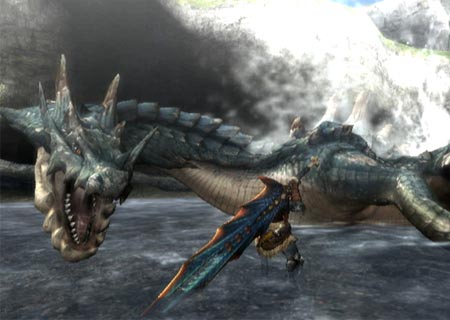 There was never a game on Wii that managed to keep my interest besides first party titles such as Mario or Zelda. For reasons unknown to North Americans, the Monster Hunter series was a huge success in Japan. With my Wii only being played when Nintendo titles would come out, Monster Hunter Tri seemed like it could break that cycle, making my purchase of a Wii feel justifiable. With so many great titles on other platforms this spring, is it worth dropping $60 for Monster Hunter Tri, or should you take the safe route and buy something else?

The story in Monster Hunter Tri is only briefly mentioned at the start. Earthquakes created by large monsters are destroying your town, and the town folk are relying on you to solve this problem. From there, you slowly accept guild quests and complete some folk’s requests, which reward you with some money and additional spoils. Since the story is boring and not worth caring about, your main focus will be on upgrading your equipment by acquiring the desired materials.

You would acquire these materials by hunting monsters or combining items to get a desired object.  Encounters with these monsters will happen on the ground, from the air, or while you are swimming in the water. Much like in real life, your instincts will tell you when something is dangerous, or when something is harmless. What Monster Hunter Tri does well is effectively portray which monsters you can take on in a fight, or which monster you should stay clear from completely. Fighting these large scale monsters develops a fear inside you, and these fears will also be displayed through your characters actions such as: running with high knees, hoping that he doesn’t get knocked out.

Fighting these monsters initially is frustrating since there is no lock on whatsoever, which makes timing your hits and dodging attacks even more important than before. If you have an extra ten bucks and you don’t already own a classic controller, then you should probably make the investment and spend the money to buy the game that comes bundled with one. It’s beneficial to use combos, but it won’t be as effective if you are using aWiimote and Nun-chuck.

In order to do some damage to your enemies, you of course need to find a weapon that you can use effectively. There are seven different types of weapons that both have their advantages and disadvantages, which makes choosing your weapon based solely on preference, not statistics. Once you get the hang of how the combat works, you can probably take on boss monsters yourself, but it sometimes can take almost more than forty minutes to take one down.

The best part of Monster Hunter Tri is its online multiplayer component, where you and three other hunters can complete quests, or take down bosses. If you think that Monster Hunter Tri is a MMORPG, then you have been misinformed. The most appropriate description would be a drop-in and drop-out cooperative experience, that just so happens to be an RPG. The multiplayer follows the same formula as the single player, but it’s just more fun playing with people.

Capcom has stated that they want to supportMonster Hunter Tri with more content, which they already have started doing. The online multiplayer features full keyboard support and Wii Speak compatibility, which is all complemented by the strong online community.  Things like event quests are just a small thing that shows Capcom really cares about their user base.

Monster Hunter Tri provides over hundreds of hours of gameplay, and Capcom plans to add more on top of that. This game will give you a reason to turn on your Wii again, but it seems like it would be a better overall experience if it was on a HD console, since it doesn’t even use any of the Wii’s unique features. Multiplayer works great and something about it will make you want to keep upgrading your character to get that next tier of equipment, even if it seems impossible at first. There are many great games coming out this spring, but if you own a Wii and you’re looking for something with a lot of content for your dollar or looking for a reason to play your Wii again, then Monster Hunter Tri is definitely worth investing your time and money into.