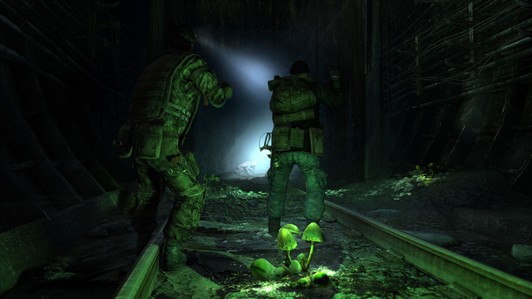 I was holding this 500 page novel in my hand while standing in Indigo, knowing that I was about to do something stupid, actually buy a book. The last time I bought a novel for fun was back in Elementary School, where I ordered this book from Scholastic called Loser, which I never ended up even getting half way through. Except this time, I actually read every page from front to back, including the advertisement for the Xbox game on the last page. I was so invested Metro 2003, invested in this underground city that I have been reading about for a month, so I wanted to see more.

Moving through the chapters, I could never take the thought of the game out of my mind. I was curious to see how 4A Games would take a book that was light on action, and then turn it into an exciting first-person shooter. So far, my curiosity has somewhat ruined the image in which I had created in my head, something I began to regret the moment the first scene of the game began to play. The overwhelming fear of darkness and the unknown that was often brought up in the novel was gone. The subway tunnels weren’t frightening at all; they felt very artificial compared to the dirty and dark tunnels described in the book, especially when I saw spots of green radiation placed along the way, almost like they needed to be clearer for the slower players who haven’t caught on that the world above was bombarded by nuclear bombs.

That was my main problem, not the spots of radiation, but the constant obvious cues to themes or what was waiting beyond the darkness of the tunnels. Everything was so direct, references to the “dark ones”, the nuclear war, the struggle between stations, it all felt forced down my throat instead of gradually discovered. Though, as I continued to play, I realized that games, especially shooters, need to be enjoyable and fun to play. Waiting to the half way point of the plot to shoot someone, isn’t going to suffice when most first-person shooters are always putting players at the peak of the action. Why couldn’t there be some type of middle ground that was a perfect blend of story and gameplay. Many games have done it successfully before, so why did the developers decide to focus a lot on the shooting, and less on the story? I wish 4A took the best parts of the novel and the best parts of a shooter, and combined them together to actually make something interesting, while still keeping the playerinvolved.

Then maybe that’s where part of my problem lies. I try to zone out and just focus on what is in front of me, but no matter how hard I try, I can’t simply forget about the novel and just experience Metro 2033 for what it is. It is especially difficult when characters with the same name as in the novel appear in the game, and then proceed to die in a way that isn’t at all similar to the way I know. Though the near the end, when the game was really only similar in name and location, I played without Dmitry’s story at the forefront of my mind. Now all I thought about was my disappointment in 4A for having access to such a great world, and not coming close to capitalizing on the potential of making a great narrative experience.

In the presence of E3, THQ recently released a trailer for a game to follow Metro 2033, titled Metro Last Light. After watching it, I wasn’t sure if I wanted to play it. There were only glimpses of gameplay, but the most attractive thing about the trailer was the story. I don’t know anything about it, which is probably whyI’m so interested in it in the first place.