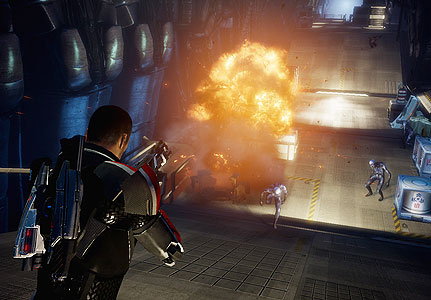 The opinions on Mass Effect 1 were divided between people who loved the game, and people who realized the potential but were held back by technical issues. With tons of time being spent on the creation of the Universe and the story behind it, not everything could reach the level of quality shown in most BioWare games. With the story and universe established, hopefully there would be enough time to iron out the wrinkles that creased the first game. Could BioWare build upon the moment created when they released Dragon Age: Origins back in October, or will Mass Effect 2 disappoint.

The first thing you will do in Mass Effect 2 is create your character, which gives you the option to import your Mass Effect 1 character. This means that all of your past events, unique decisions, character stats and appearance from Mass Effect 1 will be present.  Since there are a lot of references to past events, it is highly recommend that everyone play through the first Mass Effect to get caught up with the story, if you haven’t done so already. But if for some reason you can’t import your character or play through the game, you will choose what happened for the important events.

To sum up what was improved from the first installment in the Mass Effect series, it would be that everything that was wrong with the first game is either fixed or removed. The most noticeable improvement is the combat, which controls a lotbetter and is in some ways similar to Gears of War. If you were an avid Gears of War fan, you will try to execute specific button combinations, only to realize that you were playing Mass Effect. Other improvements are regenerable health, easier squad command, no driving sequences and better placement of checkpoints. The cinematic approach of cut scenes and conversations immerses you so deep into the game, that hours of playtime will feels like minutes. Since every character has a different life like personality, it won’t just feel like you’re talking to animated polygons.

Some might argue that the role playing elements from the first game were not all seen in Mass Effect 2, because of its more action like style of play. You have your traditional experience points and leveling up system, but the concept of role playing is very much present and enough to make you feel the character progression. Weapons can found throughout the world, but there is a very limited number on how many you will find. To upgrade weapons, you have to find the upgrade and have enough minerals to be able to apply that upgrade – the concept is easier to grasp visually. RPG purists might be a bit disappointed if they are expecting a very traditional experience, but the fiction and characters really take the spotlight for the entire game.

Every planet has its own features that make it unique, making the feeling of space exploration feel genuine. If you’re curious to read more about the universe of Mass Effect, you have a codex which will update with new information on for newly visited planet, the introduction to a new alien race, etc. Every time you progress in the story, you will always want to know what is going to happen next. Depending on the choices you make, the result will either be want you desired, or will be something that will leave you with the feeling of regret.

Head to toe, Mass Effect 2 is game that does everything you would want from a story driven game. Though it might have slightly steered away from its original RPG formula, it will still interest anyone who is looking for something outstanding to play. Trying to find an issue or annoyance is almost impossible without trying to nitpick, which makes you wonder how much polish this game went through before it shipped to stores. Overall this 32-40 hour experience is one of the best you will see from any game you will play, and if you haven’t purchased a copy yet, do not hesitate in the slightest.