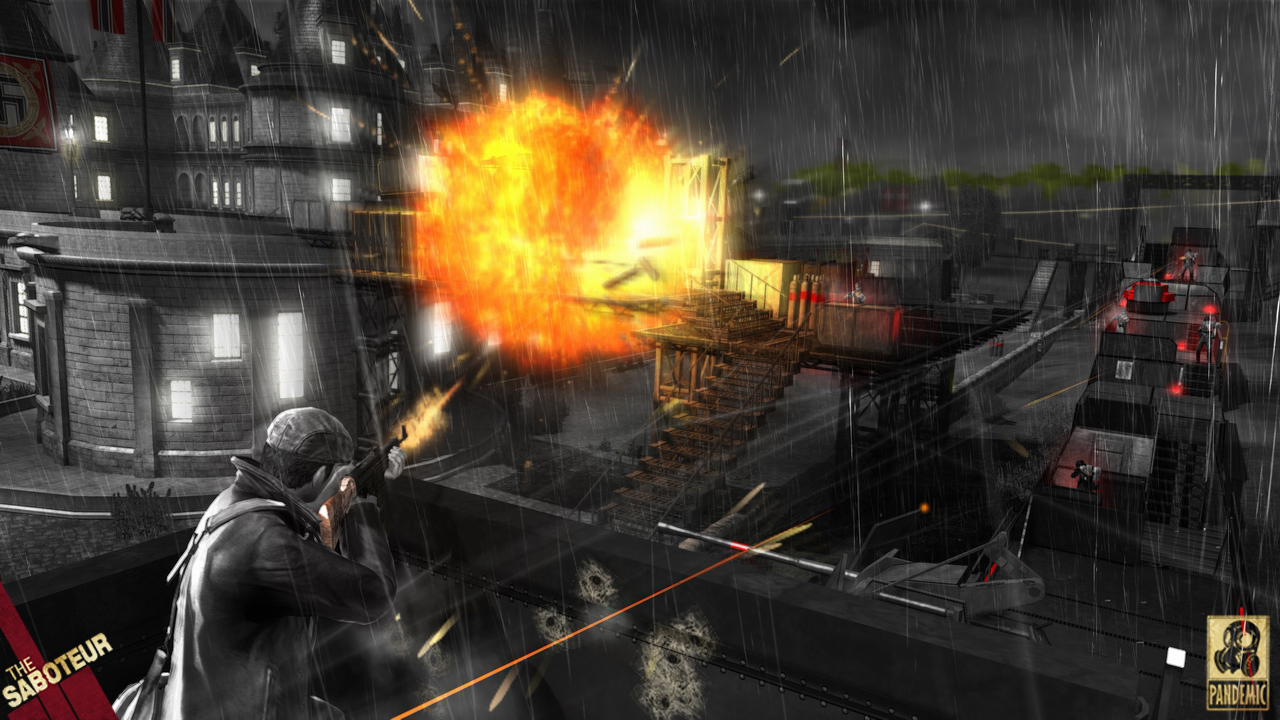 I’m not really sure if picking The Saboteur was the right choice, yet I couldn’t imagine Mafia 2, Crackdown or any other sandbox game I have skipped, offering something that I would sorely miss in The Saboteur. What caught my attention and pushed The Saboteur to the front of my decision making was the aspect of societal influence that affected the appearance of Paris. Parts of the city were either blanketed with black and white and heavy Nazi influence, or bright and colorful representing the French Resistance. This color scheme didn’t affect the game as much as I had initially thought, brightening up parts of the city made it slightly easier to flee the Nazi’s after a mission or confrontation with soldiers, though the real benefit was you could now actually see what you were doing.

Escaping the Nazis with ease wasn’t my motivation to strengthen the resistance, it was derived from the inability to clearly distinguish what you where shooting and where you heading due to the blanket of darkness. At first it looked great to be driving down the dark coble stone roads with the only color emitting from the red Nazi banners, then it became annoying having to always squint to see what lay in front of you. The only reason you were able to see some of the Nazis in the darker parts of the city, was their red glow that was obviously implemented after the development team probably realized that the whole black and white tones only obscured your vision.

The fate of Electronic Arts’ studios was also foggy as Pandemic, the studio behind The Saboteur, no longer exists, becoming one of the many studios under EA’s wing that failed to deliver a quality product to keep themselves alive. While playing The Saboteur, you never get the feeling like they ran out of time and rushed to finish the project; there just wasn’t any ambition to create a unique game. Taking already practiced and refined ideas didn’t work at all well for them, no part of The Saboteur reached the same level of quality game design seen in other more successful sand box experiences.

The lower quality is apparent throughout as Sean Devlin – the character you control -can somewhat perform a number of maneuvers and tricks, besides charming the ladies and drinking the amounts of alcohol associated with Irishmen. He can scale the sides of buildings much like Assassin’s Creed or InFamous, but he can only grasp certain parts of a building which flashes in white. To restrict you even further, you have to constantly press the jump button to continue to climb. A smooth movement between short distanced objects would have been freer flowing, and to cover larger distances like a window sill and top of a window, force the player to jump for the ledge, not jump for a ledge that is inches away. They are not large issues but they make scaling walls and buildings, an aspect of games I love to do, repetitive and not at all gratifying when the top of a building is reached. 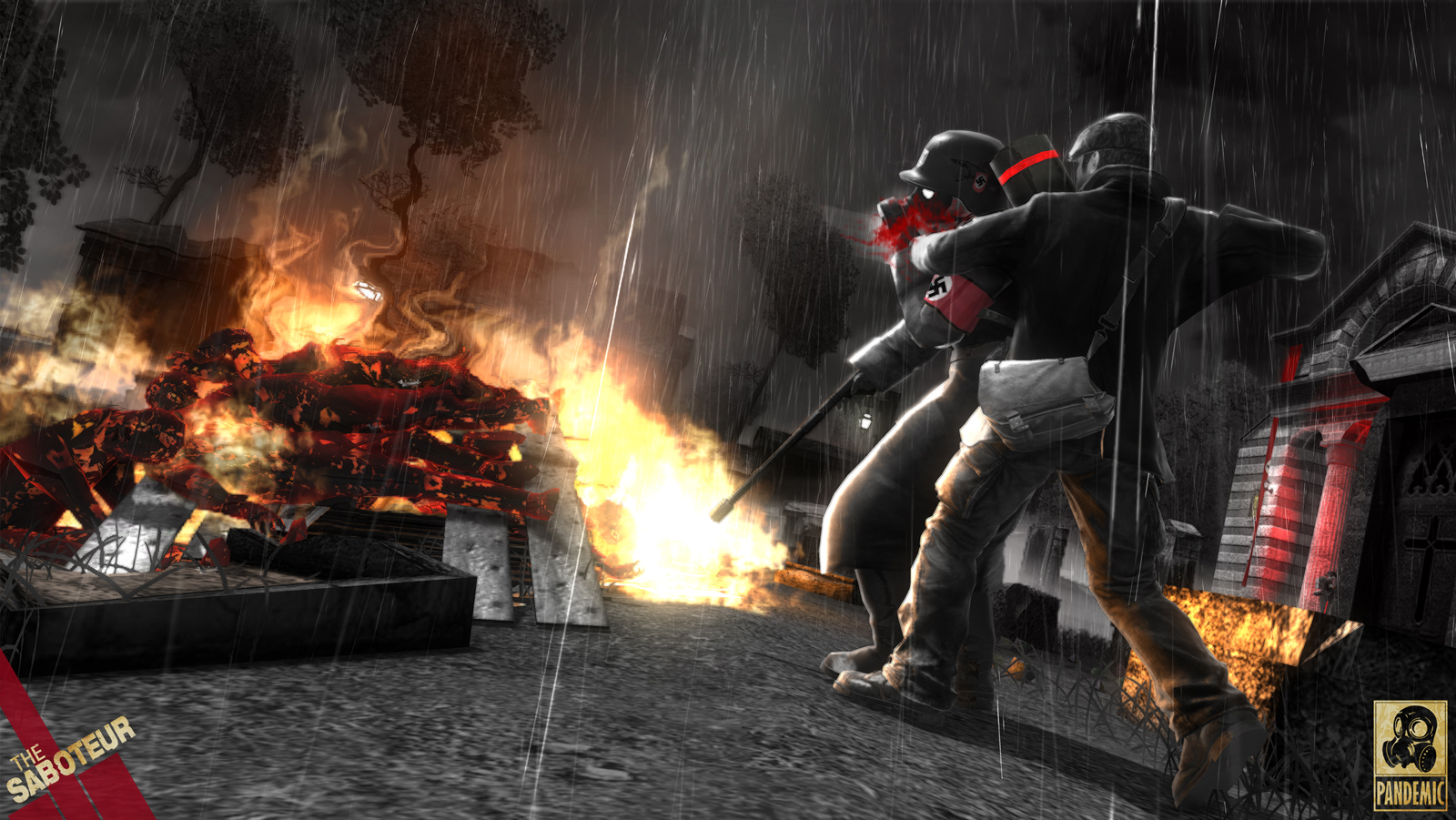 And this repetitive nature also bleeds into the mission structure of the story. All you are ever doing is killing or saving a person, or destroying an object or place of importance. The stealth in the missions gives some variety while pick your path, but the stealth – which revolves around strictly take the disguise of an enemy soldier – is not really at all stealthy. It’s effective when getting past multiple Nazi guards, but that feeling of tension, trying to not blow your cover as you are about to reach your goal, is never present because you know you’ll just end up shooting up the place once you get deep enough into the building.

What made The Saboteur so appealing was being able to sabotage the Nazis from within Paris. But having an Irish protagonist who has no motivation to liberate Paris doesn’t at all make sense. Why not make a French protagonist, who wants live freely in his home country, the focus of the game? Doesn’t that make more sense than some Irishman who doesn’t care what happens to this foreign land, and is only concerned with avenging his friend’s death? The idea has so much potential, yet Pandemic managed to take this awesome idea and build on it in the most illogical way possible.

There is a reason why The Saboteur was only $15 at my local Best Buy, it never made a genuine attempt to change the way we play sand box games, it just took what we were already familiar with and offered it to us in a far less enjoyable fashion. The city’s shifting influence sounded like a great idea, though it doesn’t do anything that makes the game better, it does the opposite and makes it worse by limiting your chances to detect what exactly keeps shooting you in the head, or is blocking you from moving forward. If some changes were made to the story like getting rid of the terribly voiced Irish main character, or to add some variety to the missions that are the only form of worldly interaction besides blowing up the guard towers, The Saboteur wouldn’t have been so quickly overlooked, and maybe, but probably not, Pandemic would still be active and making games for us to play. You learn from mistakes I guess, and sometimes it might cost you your entire studio to learn this lesson, but not everyone can be a winner, there has to be a loser, and in this case, this loser’s name is Sean Devlin.