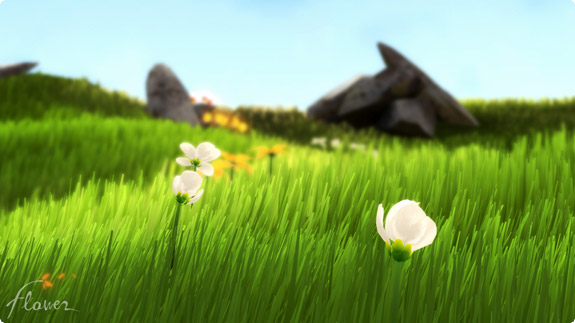 Sometimes not matter how positive and glowing reviewers or forum users are about a game, you just have to ignore them and just have confidence in your own knowledge and gut feeling. PSN’s downloaded title Flower is constantly talked about, referred to as a masterpiece of simple game design and atmosphere.  That Flower with its two short hours in length, positively changed their day and it made significantly more enjoyable.

Flower is nothing like I expected. Actually, it’s exactly what I expected, and nothing like what everyone else was saying. I never understood the praise surrounding Flower; I couldn’t at all believe that a simple game where you controlled a flower pedal with the Six-Axis would turn my normal day into a joyful time every waking second. Thatgamecompany made a game that looks good, that’s about it.

As far as overrated games go, Flower sits at the very top of my list, with huge a gap between the next game and where it stands. I don’t feel like I’ve gained anything from flower, I only feel like I’ve lost $10 and a chuck of my time I’d rather spend elsewhere. I can understand the appreciation for the graphics and the sensation of flying in the wind, moving the blades of grass apart as you flew near the ground. Yet I don’t understand how it is life changing or a must own for every PS3 owner, there are plenty of more deserving titles that I would declare a “must own” before even considering playing Flower.

I’m not supporter of review scores (especially the ten-scale system) but I know for a fact that Flower is nowhere close of deserving the 87 aggregate score currently on Metacritic. Sure the game industry’s review scale is so top heavy that games in the 80s are often looked past as not good enough, but 13 points away from a perfect score? I don’t think so.

Seems like a lot of reviewers didn’t know what to exactly make of Flower because it was different than the games most of us have seen. And I think same applies to gamers who are not really sure what to think, therefore support the review site in which they regularly visit. I’m also confident that Flower isn’t a game that appeals to a niche or casual audience. Describing this game to my sister was awkward; she just looked at me weird and gave a look of “Is he actually going to buy this game? What’s wrong with this kid?”.

Remember back in 2006 when Sony just shoved gyro control in their controller last minute after seeing what Nintendo did? Yeah, so do I. Flower would have been a perfect tech demo for the console. It would have showed off what the PS3 was capable of graphically, while using their last minute addition that was the Six-Axis control.

Thatgamescompany’s Journey should release on PSN later this year, and that looks like it is going to be more of a game than whatever Flower was supposed to be. My excitement for Journey has greatly diminished after playing Flower, but I try to be open minded, carefully analyze what people are saying about games as time passes. Sometimes you take risks. They either work in your favor, or leave you with $10 less in your wallet. For me, despite not enjoying it, the experience is valuable for future conversations. So when someone brings up Flower and they rejoice and exclam the masterpiece that it is, I can say why I think it not worth buying, and then drive them near farm land in the spring, and sit them down in a fower. Better yet, I’ll bring them somewhere almost instantly, right outside the damn door.