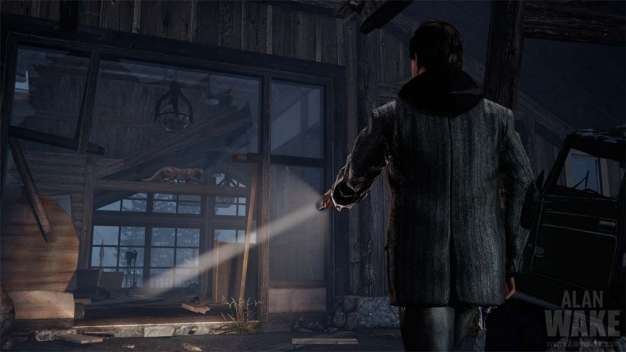 Alan Wake didn’t sell well in its debut month, despite it being well received by most media outlets. I got excited around Alan Wake’s launch after watching the shorts titled Bright Falls, which were prequel events to the game’s main story. Atmospheric and story driven games like BioShock never seem to impress me as much as it does to others, though developer Remedy successfully created game that keeps my initial enthusiasm all the way to the end.

Five years in the making, I expected to see some dated aspects of the game, and the only one that was extremely obvious was the lip syncing. There were moments in Alan Wake where it reminded me of a foreign movie that was poorly dubbed in English. Working on a game for five years isn’t so bad when you consider how real the world in Alan Wake feels. The forests and architecture of the towns feel natural, and even though you will be following linear forest paths, the amount of space around you encourages exploration.

Going beyond the linear path will often reward you with some hidden items or collectables, though sometimes I questioned if I had the courage to run into the darkness with only my flashlight and a few bullets in my magnum. A problem with atmospheric games is I become too comfortable with my surroundings, and that awesome atmosphere is no longer effective. Alan Wake retains its spooky and supernatural atmosphere all the way until the credits roll, earning the title of “A Physiological Action Thriller”.

I had an awesome time seeing the easy to follow story unravel as I progressed through the game. The horror genre isn’t my favourite genre in gaming, but I’m willing to give a game a try if it is done right. Alan Wake surprised me, I didn’t expect to enjoy it as much as I did, and I also didn’t expect to complete an 8-10 hour game in two days. I wouldn’t mind playing through Alan Wake a second time since it’s such a gorgeous looking game and is enjoyable to play, but I don’t think I am mentally ready, or ready to change my underwear every hour.