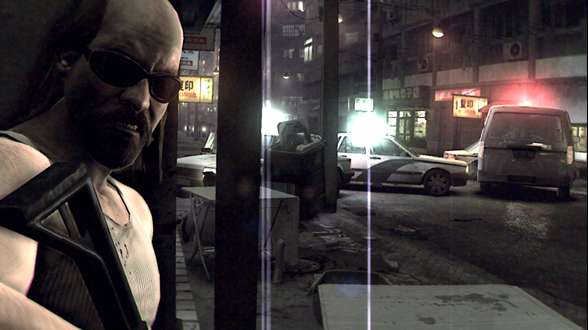 In Kane and Lynch 2 it looks as if you are playing the game through the perspective of a cameraman, who follows Lynch and wields a cheap camera. The screen is a little fuzzy and shaky – some of the bad attributes of a novice cameraman.  When you sprint you get the impression that the cameraman is trying to keep up with Lynch, struggling to hold the camera straight, which looks similar to the roadie run in Gears of War.

Something that all third person shooters should include is a cover based system, which Kane and Lynch fortunately has done. Although the cover system is functional and easy to understand, there isn’t anything very interesting about actually shooting the bad guys. You can change it up a little by using an enemy as a human shield, but apart from that you just shoot stuff.

I look at Kane and Lynch like how I would look at Army of Two – a cooperative experience that should feel like you need the cooperation of two people. Though your partner in the demo was a computer, there wasn’t anything to make me feel like I was part of a team.

Of course the demo limits the amount of content to be seen, so I don’t know how interesting the story is, or if the multiplayer has longevity. Kane and Lynch 2 releases on August 24th, and it will be interesting to see how it sells compared to Mafia 2, which also releases that day.