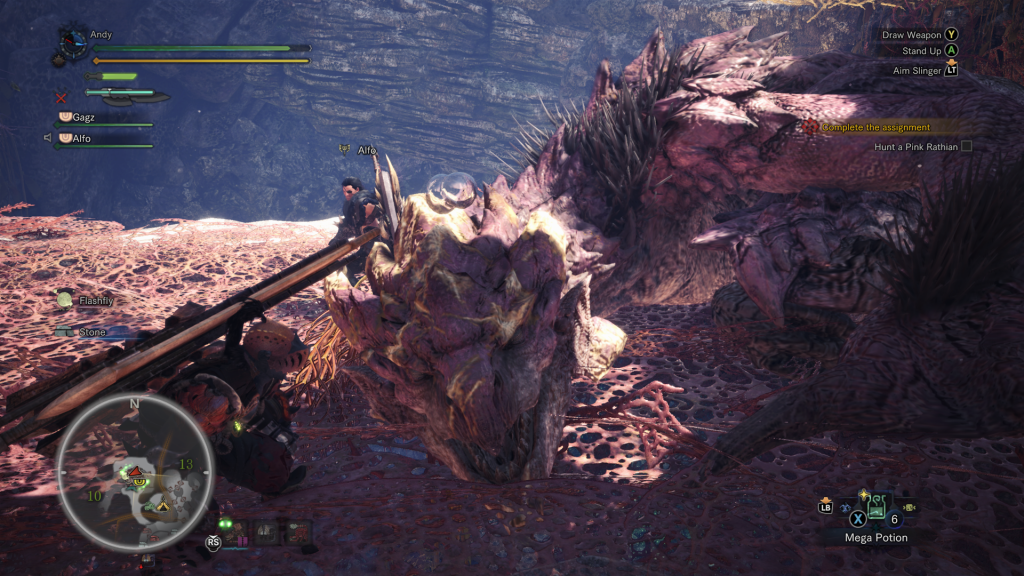 In Monster Hunter: World, the botanist always comments on the latest story events. He might think I care about his thoughts on the elder dragons, but I don’t. I just want to access my cultivation box. He and every other NPC love a little chit-chat before offering their services. Their chit-chat adds extra dialogue to a game not at all about its story.

Monster Hunter’s plot condenses to, “There’s a giant monster threatening our city, so please go hunt other monsters to prepare for it.” Every Monster Hunter title follows the same formula. These wrote, simple stories exist in many games and genres.

The simple story lays a foundational reason for player action. I call these stories, “Why you are here” stories (WYAH). Instead of throwing the player into a location with a quest checklist, a WYAH story provides context. The context frames player objectives.

Monster Hunter: World, despite modernizing in many areas, trips over its story additions. The new cutscenes and dialogue feel like traffic lights, stopping progress until it says you can move forward. The story quests also gate co-op by requiring all players to watch the cutscenes at least once before inviting friends. The restriction complicates the core of Monster Hunter – hunting with friends.

Forza Horizon best balances its WYAH story with the core of the game – driving. Every Forza Horizon frames your goals the same way. You, the driver, must win races during the music festival to finish atop the standings. The context frames the driving with a simple, clear objective. After some milestones, short cutscenes congratulate your achievement. Then you move onto the next race, area or tier, repeating the process for rest of the game. The WYAH story doesn’t get in your way.

Battlefield 1’s Operations mode tells an informative WYAH story through a multiplayer setting, which is uncommon for most games. Operations places two teams on a dynamic map. If the attacking team captures the objectives, the map moves further into the defending team’s territory. If the attackers continue to succeed, the map keeps moving back until the last line of defence.

The Operations locations, often based on real WWI battles, come with historical context. In the Conquer Hell operation, the Americans fight the German army through the Western Front and into the Argonne Forest. The Americans and French succeed in the key battles, which contextualizes the shift from urban locations to a forest.

Unlike Monster Hunter, Battlefield’s Operations include story during moments of downtime. At the beginning and end of matches during loading screens, short videos play. The cutscenes and monologues don’t halt progress or play, nor does it gate content. While the context doesn’t improve your in-game understanding, it enhances your sense of place. My perspective of each map changed knowing real soldiers experienced the worse, dreadful version of your battle. I often found myself asking, “How the hell did soldiers fight like this?”

WYAH stories exist to provide context and frame the player’s objective. If the WYAH story tries to reach beyond its intended purpose, it then becomes obtrusive. The story and cutscenes slow progress, gate content and derails goals. Monster Hunter: World shouldn’t remove its whole story, just the parts not needed to understand why you hunt monsters. We need a reason or for our actions, and WYAH stories fulfills it.