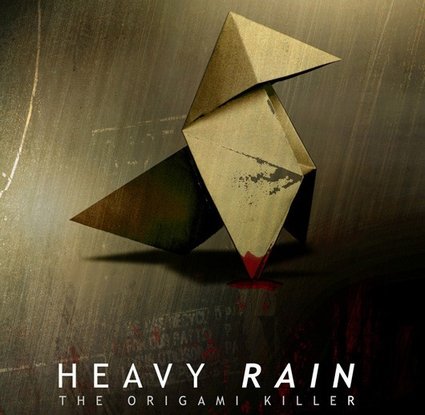 When we first saw Heavy Rain last year, it was easy to criticize since the core gameplay mechanics were only quick-time button events. Common jokes or descriptions being thrown around consisted of things like: “it’s just interactive movie”, or “I can’t wait for Heavy Rain the game to come out”. With the confirmation of no prequels or sequels to Heavy Rain, can this standalone title start a new genre of games?

If you always wanted to learn how to fold origami figures; while installing Heavy Rain onto your PS3, there are instructions on how to fold the bird that is on the front of the game case, with the piece of paper that is so generously provided. After playing with your paper bird, you awake as the character Ethan and go through the tutorial which is disguised as household chores. Other than the quick time events, you control where your character moves which feels clumsy and very frustrating when in tight areas.

After doing a set number of things, the next event is triggered and you go through the prompted buttons, which almost simulates the feeling of playing a mini-game. Since you’re not controlling your characters movements directly, there is somewhat of a disconnect with your character and it feels like you’re watching from the side lines, hoping that you don’t press circle instead of square. There will be situations where your timing is off which grows to a chain of misses, followed by an outcome that could change dramatically with no chances to redo it.

At this point it seems like Heavy Rain is not fun at all, and there is no reason in even trying this game, but that’s not true. The best part of Heavy Rain is how clever and interesting the story is, especially seeing it through different perspectives. You will play the role of a few different characters, who are all investigating the case of the Origami Killer. The Origami Killer is the most wanted criminal, who is killing little boys and leaving an origami figure in the dead child’s hand. Though there is nothing interesting about the gameplay, you will keep turning on your PS3 just to find out who the increasing clever killer really is.

Watching these characters build upon and expand on a lead with very little clues is incredible, and its sectioned nature with cliff hanger endings is similar to that of a murder mystery T.V. series. Characters are fleshed out with enough background information to make them feel intertwined with the story, and the voice actors really give the characters their own personalities. By holding L2, the four face buttons will float around your characters head, each corresponding with something they are thinking about. What’s odd about this that some their thoughts don’t make sense in respect to the situation. You will spend a lot of time thinking and planning for your next move, which makes everyone’s story different and unique to them.

Heavy Rain is a one of a kind game that chose to put the story before the gameplay.  Twists are unexpected and its photo realistic graphics are probably the best to date. The quick time events aren’t enough to push you through this 8-10 hour game, but the griping story and well written characters make for an enjoyable experience, even if you decide to sit down beside a friend and watch it unfold.