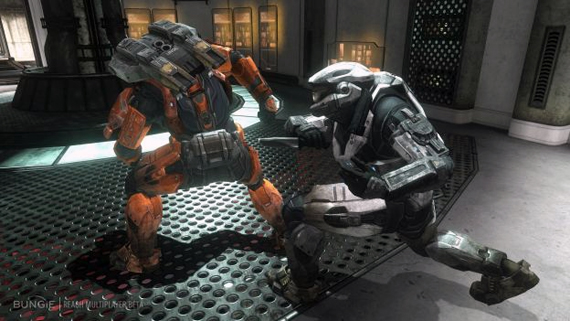 Since people on Twitter are so generous, I managed to snag a Halo Reach Beta code and I could not wait to start playing it. Compared to Halo 3, the character customization provides a lot more variety to personalize your character. There are some things that I wish they expanded on such as the color variations for your armor, but it’s still very early in development so more can be added.

With the three or so hours that I played, it was fun to go back and play some Halo that didn’t feel as dated as Halo 3, but if you played a Halo game before, you won’t feel like a stranger. The most noticeable change about the Reach multiplayer so far is the armor abilities. The armor abilities don’t feel out of place, and each one can play an important role depending on the gametype.

There are a couple of new gametypes in the beta such as; Invasion – a Spartan versus Elites objective mode similar to Battlefield: Bad Company’s Rush mode, and Stock Pile – a capture the flag variant. Both modes work well, but the spawning in Invasion is a little awkward, though I’m sure that it will be addressed before the retail release.

It’s surprising that Bungie is calling this the Halo Reach “Beta” because it performs a lot better than most games on release. The only thing that this beta has done is build upon my excitement for its fall release, and while I’m waiting for that day, I’ll try to squeeze out as many hours out of the beta as I possibly can.