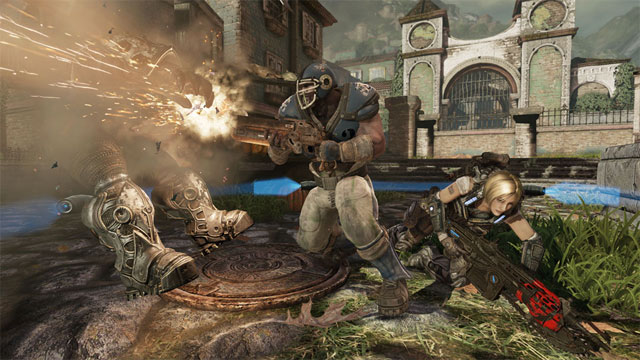 So by a huge fluke I grabbed a Gears of War 3 beta code on Twitter, from this random person who tweeted it hours before I did the search. Surprised that it wasn’t taken, I downloaded it and went in expecting the multiplayer portion to feel much like Gears of War 2, minus the host advantage and terrible hit detection. The Gears of War multiplayer has always shown promise to be amazing but with each sequel, old problems are fixed, new ones are then introduced. This was Epic’s last chance to deliver the multiplayer the fans always wanted; so far they have done just that.

Even though it has been done a million times before, the newest and probably the best game mode in the Gears of War 3 is Team Deathmatch. Each team shares a pool of 15 extra lives, a little twist to the classic definition of the infinite respawn deathmatch modes in other games. The weapons are designed for close, far and mid ranged encounters, and Team Deathmatch provides the best variety compared to King of the Hill, where everyone uses Sawed-off Shotguns and Retro Lancers. Each weapon feels radically different from each other, so I found myself always trying to find the best combination of weapons that suits my play style. Right now I use the Lancer for long to mid range fire fights, and the Sawed-off for those up close and personal moments. There have been some complaints about the Sawed-off being too powerful, though it is balanced out with the very long reload time, single shot magazines, and only 4 spare shells.

I’m sure each weapon will be appropriately tweaked based on the community feedback, so the important thing to take away from the beta is that it just works. Those moments where you were left confused swearing into your headset because the opponent just blasted a shotgun shell into your face a mile away, are far less frequent. I’m not sure what’s happening with the dedicated servers, so I don’t know how much better it plays with them on, but so far I have had no problems connecting to matches or problems with lag.

Before I got a code, I was talking to a friend who was playing it because he bought the Bulletstorm Epic edition. He described it as “Gears of War 1 and 2”, which is probably the laziest description ever, not to mention also inaccurate. A not much better description, but the one that always comes to mind is, “It’s exactly what you expect it to be”. What I mean is that you are probably imagining Gears of War 2, with new weapons and refinements to the gameplay. That’s it really. What the Gears of War 3 beta is showing is the Gears multiplayer every fan wanted; a multiplayer with no host advantage, and a consistent performance from each weapon.  If you haven’t gotten your hands on a code yet don’t worry, this time the wait is going to be worth it.