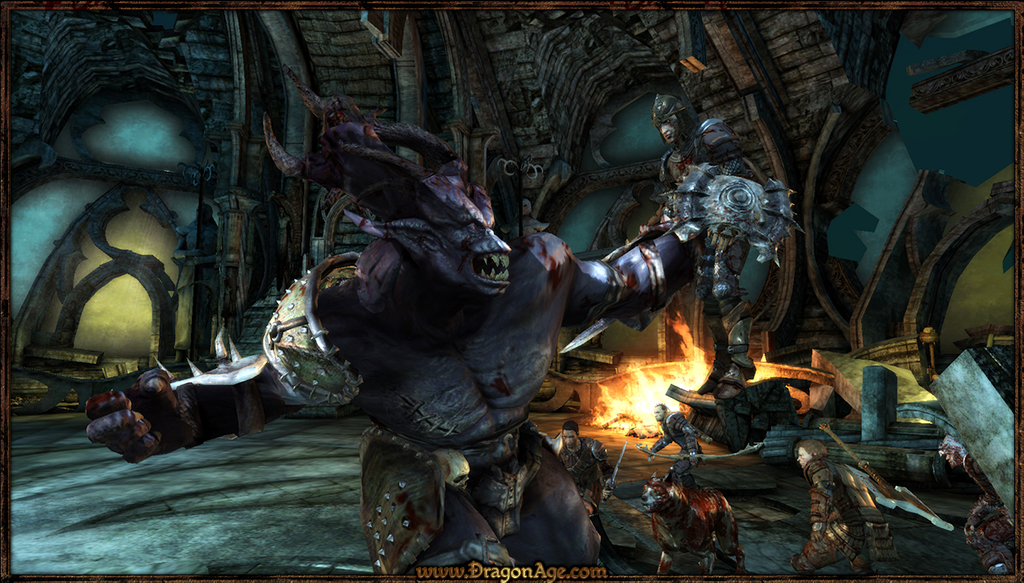 Quarter 4 of 2009 was overflowing the amount of quality games or big name brands, making it understandable for a game like Dragon Age: Origins to slip by the unnoticed.  Like myself, many people were hesitant to invest their money into Dragon Age: Origins, but with everyone speaking so highly about it, word of mouth still proves to be the best way to advertise.  Can this spiritual successor to Baldur’s Gate still have appeal to gamers even though its core gameplay is similar to old school PC RPGs?

Right when you pop in the disc, you have the option to choose your characters class and customize your characters looks and sounds.  You can choose from three classes which are Human, Elf and Dwarf. Each class can be a Rogue, Warrior or Mage, except for Dwarfs which can only be Warriors or Rogues because of their high resistance to magic. You also have the option to choose an origin story, which builds the foundation for your characters personality. For example, for the Dwarf class; the first origin story you are casteless and the second you are born into a high caste, trying to prove yourself worthy of your high status. Multiple playthroughs is obvious, since it would be intriguing to see how the other classes and origin stories are put together.

The story in Dragon Age: Origins is simple, these monsters called the Darkspawn are multiplying rapidly below the surface, and are looking to move to the top and destroy everything in their paths.  It is up to you to make sure that this doesn’t happen. The story isn’t anything spectacular, but it’s the characters personalities and everything inside the world that immerses you even further into the game. The dialog is well written and it is all complimented by the fantastic voice acting. Each conversation can differ since there are multiple dialog options to choose from, which gives a different approach to a situation. Similar to Mass Effect, you find something called a codex, which gives background information on a particular item, place etc. Unless you love reading more than playing games, then you won’t mind the amount of codex updates you can find. At first I tried to read as much of the codex as I could, but it’s just too boring to sit there and read pages of information about some rock you found.

Along with your character, your party members are also very important since you need a good balance of support, offensive and defensive players.  Each class has specific talents or spells which you can upgrade to your desired level. You can map these talents to the face buttons on your controller, and when you press the right trigger you can access a second set of mapped buttons. The controls on consoles work fine but it is clear that the experience is superior on the PC. The combat system is very similar to World of Warcraft and for what it’s trying to do, it does it well. To some players it may feel dated, but it isn’t that big of an issue. The only consistent issue that occurs is the frame rate slowing down to the point where it’s not game breaking, but it can be somewhat annoying.  The only other real issue is the moment before a boss battles occurs, you go through a whole conversation before you actually fight him. If you die, you have to go through that exact conversation again just to get another shot at winning the battle.

Dragon Age presents itself well, with easy to navigate menus and realistic character models. The graphics overall aren’t anything to write home about, but it is enough to satisfy those who love good graphics. The music is once again average, but it’s there to set a mood and it does what it’s supposed to. What Dragon Age just screams for is some type of multiplayer or online support. Being able to jump into a buddies party and go through some dungeons would of been tonnes of fun, or even have your party square off against someone else’s party. This game definitely will not appeal to people who are not willing to commit to a huge game like Dragon Age, but if you have some interest it’s at least worth a try. Overall, Dragon Age: Origins is one of the best games of 2009, and with hundreds of hours of gameplay, you will be playing thisgame for the months to come.