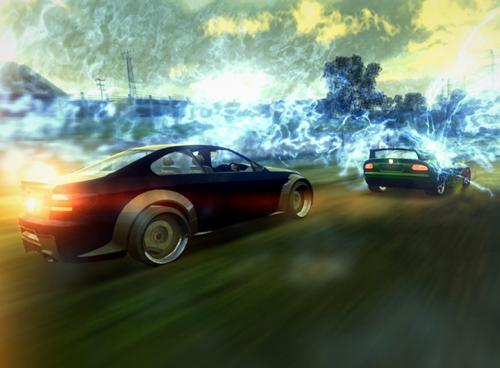 Blur is a game that I have been following for while now, not only because it’s described as Mario Kart with real cars, it’s because I’m looking for a racer that will keep my attention. After starting my first race I was a little disappointed with the way the cars handled. Cars felt like they weren’t responding enough to my sharp movements, and turning feels like it could be better. If it controlled similarly to Burnout Paradise where you could maneuver your car precisely, then I would praise Blur for bringing Mario Kart outside of Nintendo.

What makes Blur stand out is the power-ups you can use against your opponents. With each hit and explosion being set off with shapes and colors flying in ever direction, you see the influence from Geometry Wars Evolved. In the end, Blur is still in the Beta stage, so it’s understandable that some tune ups are required before it’s release. Blur is an interesting game, and if you want to know more than try to get a beta code, or wait for it’s release on May 25 in the U.S. and May 28 for Europe.