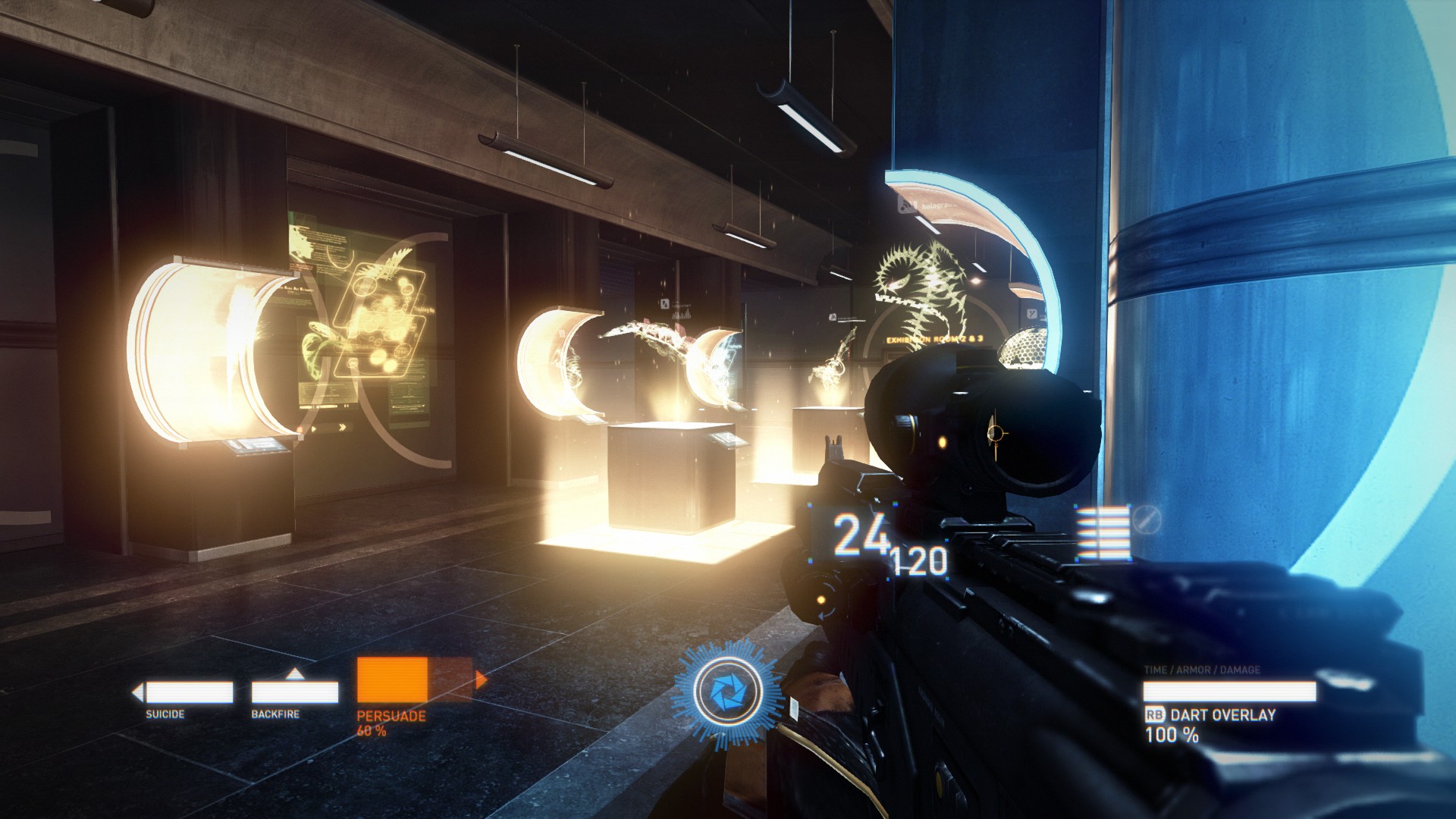 I continue to look for a game that doesn’t quite exist yet. I want a game where I can explore and climb the buildings a cyberpunk city (a dirty and grimy version of science fiction where even the most common man owns advanced technology) and gameplay that won’t burden my time spent learning about cybernetic implants or other technology.

Deus Ex: Human Revolution comes closest to that elusive cyberpunk game that I imagine, though its confined hub-worlds and stealth mechanics represent game systems that I usually find more tedious than enjoyable.  Deus Ex’s stealth enabled for many great moments when successfully bypassing an entire room of guards or even wandering the lower, dirtier half of Hengsha – a city with an entirely separate and cleaner city floating directly above. I continued to play Deus Ex: Human Revolution for the appearance, fiction and societal issues a technologically distant yet similar world, not for the gameplay itself.

While searching for a game that would offer gameplay and combat not focused on stealth, I came across Syndicate – a linear first-person corridor shooter. Unfortunately, Syndicate did not provide what I specifically looked for. I ignored the narrative and spent far too much time looking at horizon of brightly lit landscapes I would rather explore instead of the white hallways I always found myself it.

Even with the relative newness of game development in the 3D era, I did not expect such small selection within the setting. Why does such a large void exist in cyberpunk themed video games developed in the last decade? I came across a few titles that closely fit the description of an open world game, but most of them (for me at least) come with a sliver of cynicism or developmental issues.

Prey 2’s first reveal came during E3 2011; separate from the three large press conferences of Nintendo, Sony and Microsoft. I never paid much attention to Prey 2. Without the reveal happening on any of the press conference stages, my interest in any other games depended on my level of previous association. My attention stayed with what majorpublishers and console manufacturers showed at E3. I couldn’t inform myself of every game available, especially when not attending the convention itself.

Slated for a 2012 release during Prey 2’s reveal, I remember a lot of excitement around the live gameplay and how it so closely matched the computer generated trailer released a week before. Only until recently did I finally understand why people became so excited about a bounty hunter in a Bladerunner-esque world. Prey 2 features aliens and other creatures, an aspect I don’t particularly associate with cyberpunk, but the dark, dirty mechanized city streets in which you can climb, vault and slide your way through while chasing your bounty, brings together of elements that I love in games.

Prey 2 nearly fits all aspects for an enjoyable cyberpunk game. Too bad no one knows when we’ll play. I stated before its 2012 release which, unless you traveled in a time machine (but it must be a dirty, rusty time machine), already passed.  To the dismay of many people, Bethesda announced Prey 2’s delay to an unknown date due to the game’s inability to meet their standards. The delay came in April of last year; a full year ago, after many rumours of its cancellation began to emerge. Considering the lack information on the progress of its development, an actual cancelation remains a possibility.

Remember Me – The value of experience

A few months after Prey 2’s reveal, Paris based developers DONTNOD announced their first game called Adrift. The announcement came during Gamescom 2011 with very few specifics to what the game would feature. Already established however, Adrift would take place in Neo-Paris, a cyberpunk city in the year of 2084 where people buy and sell human memories.

How you would even turn memories into something you can even sell seems crazy, let alone what you need of them or how to use these memories. DONTNOD Entertainment later renamed Adrift to Remember Me, a platforming action game with a female lead. Based the trailers released and the written previews, Remember Me sounds similar in structure to Enslaved: Odyssey to the West – a linear, climb assist heavy platformer, and less similar to the liberating free roam of Assassin’s Creed. I don’t think linear video games automatically translate into a less enjoyable game; the marketplace supports a variety of differently structured games.

As much as I would prefer to climb the towering buildings of Neo-Paris at my own volition without glowing hand-grabs guiding the way, I worry more about the inexperience of DONTNOD Entertainment in delivering a large budget video game. Much risk comes with buying a product from a source without a portfolio to reference, yet at the same time, the discovery of the talent will reveal the creativity of the studio itself.

Familiarity with a studio’s games can definitely make purchasing new games much simpler, or in the case of CD Projekt Red, much more difficult.

I try to remember my time with The Witcher 2 and re-read what I wrote about it, yet I remember very little. I remember bits and pieces of the story and the colourful landscapes, but nothing significant enough to form an argument as to why people should not painfully trudge through the unevenly paced story. My dozens of hours playing The Witcher 2 remains only a facade of a dream I fail to recount.

Even with my sour experience, I could recognize many individual parts of The Witcher 2 for their creativeness or remarkable execution. As a whole, these parts didn’t fit well together to make a cohesive experience that produced an expertly paced, enjoyable RPG.

And that promise, the talent in certain sections of The Witcher 2, makes me both hesitant and forgiving for CD Projekt Red’s new game, Cyberpunk 2077. The unknown and distant release of Cyberpunk 2077 urges patience as majority of the studio focuses on its upcoming title, The Witcher 3. To excite people and draw more talent to the studio, CD Projekt Red released a CG trailer showing off the dark, cyberpunk city and the flying cars that come with it. Without any gameplay shown, you can’t get a sense for how the game will work within a cyberpunk setting. The Polish developers confirmed the ability to roam freely in an open world with an RPG core, which to the best of my knowledge and research, comes as probably the first open world cyberpunk game.

The cyberpunk space, although free of limitations, sees few video games developed around it. When I look at the cyberpunk games announced, they all carry great promise but also some sort of issue either related to the development or personal tastes with the studios previous titles.  As of now, Remember Me actually looks like the only finished product that can provide and experience close to the game that I imagine.